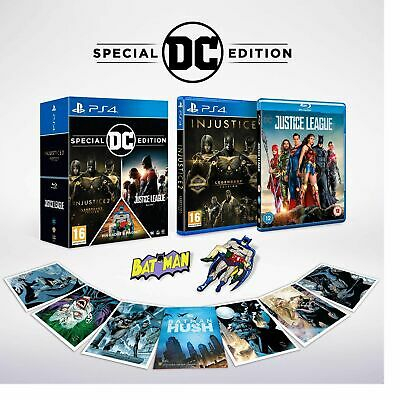 DC special Edition Pack includes:
Injustice 2 legendary Edition PS4
Justice League Blu-ray
special Edition pin badge & magnet
PostTweetShare Share with WhatsApp Share with Messenger
Community Updates
Community support
25th Feb
DC Special Edition Pack
This super-powered special edition package combines the hit fighting game Injustice 2 with a blu-ray version of the DC cinematic crossover event, Justice League! Choose from the biggest DC roster ever in Injustice 2, build up and customise your favourite DC Super Heroes and Super-Villains before battling it out in a variety of game modes. Then watch Justice League as Bruce Wayne enlists the help of his newfound allies, Wonder Woman, Aquaman, Cyborg and The Flash. Together the Justice League face a greater enemy than ever before, yet despite the formation of this unprecedented league of heroes – it may already be too late to save the planet from an assault of catastrophic proportions.

Injustice™ 2 Standard Edition
Injustice™ 2 is the super-powered sequel to the hit game Injustice™: Gods Among Us that allows players to build and power up the ultimate version of their favourite DC characters. Featuring a massive selection of DC Super Heroes and Super-Villains, players can personalise iconic DC characters with unique and powerful gear earned throughout the game. Additionally, for the first time, gamers can take control of how their characters look, fight and develop across a variety of game modes.
PRODUCT FEATURES:
Every Battle Defines You: Injustice 2 expands on the previous title’s larger-than-life showdowns. With every match, players earn gear to equip, customize and level-up their favourite DC Super Heroes and Super-Villains that meaningfully impacts not only how they look, but also how they fight.Massive Roster of DC Characters: Players can choose from the biggest DC roster ever offered in a fighting game, from classic fan favourites such as Batman, Superman, Supergirl, The Flash, Aquaman, Wonder Woman and Blue Beetle, to astonishing new villains like Atrocitus, Gorilla Grodd and Deadshot.Epic, Cinematic Storyline: Injustice 2 continues the story set in motion in Injustice: Gods Among Us as Batman and his allies work towards putting the pieces of society back together, but struggle against those who would restore Superman’s Regime. In the midst of this chaos, a new threat appears that will put Earth’s very existence at risk.Built by NetherRealm Studios: Developers of the best-selling and critically acclaimed Mortal Kombat franchise, NetherRealm Studios brings unrivaled storytelling, robust content, and best-in-class fighting mechanics to the DC Universe.Justice League
Fueled by his restored faith in humanity and inspired by Superman’s selfless act, Bruce Wayne enlists the help of his newfound ally, Diana Prince, to face an even greater enemy. Together, Batman and Wonder Woman work quickly to find and recruit a team of metahumans to stand against this newly awakened threat. But despite the formation of this unprecedented league of heroes—Batman, Wonder Woman, Aquaman, Cyborg and The Flash—it may already be too late to save the planet from an assault of catastrophic proportions.
EBay DealsEBay discount code
New Comment Subscribe Save for later
16 Comments
24th Feb
God damn it Frank, I looked on their eBay outlet and it was £24.99 before posting the one from their site. Heat added dude.
24th Feb

Haha! sorry Mixi, I seen you posted it but didn`t realise it was that recent ‌
24th Feb
Maybe if it were the Snyder cut of Justice League
24th Feb
I actually like all these but who TF is this product for
24th Feb
No! Just bought from simply games for £19.99.
24th Feb

The bin.
25th Feb
Thanks for posting; we have added your thread to the Highlights section
25th Feb
If it was the 4k bluray I'd be more interested. Instead I'll hold out on a good individual deal on the game.
26th Feb
I don't have Injustice 2 and I haven't seen Justice League either, so thanks for however at DC thought this was a good idea and thanks OP of course!!
26th Feb
thanks
26th Feb
do they not have a xbox one version of this bundle
27th Feb
The Injustice 2 cut-scenes make for a better watch than the Justice League movie.
27th Feb
Shame this isn't on xbox heat nonetheless
28th Feb
I have a feeling this is the same seller as on Simply Games as I just bought two of these for £35 (£5 discount on two buys) and it came up as Boss deals