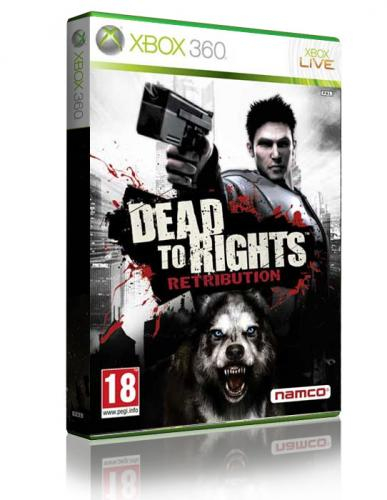 Returning to Grant City, a boom town gone bust that is falling to the worst excesses of crime, greed and corruption; Dead to Rights: Retribution follows vice cop Jack Slate as he fights to expose shadowy figures that will stop at nothing to exert their deadly influence over the crumbling metropolis. Dead to Rights: Retribution will form an original story portraying key events that shape and define Jack Slate's character including how he and Shadow first come together as partners against those who would bring the once great city to its knees.

Introducing an innovative hybrid combat system, Dead to Rights: Retribution puts the full combat potential of a highly trained, highly agitated law-enforcement officer into players' hands. Use your sidearm to pick off enemies from a distance, take cover and blind-fire with the game’s new ranged combat mechanics, or push the issue by taking human shields, stealing weapons with special disarm moves or dishing out Jack's own brutal brand of justice with deadly takedown moves. Jack is equally lethal in close-quarters combat, offering players branching melee combos, counterattacks and disarms as they take the fight to the criminal element of Grant City. Jack will encounter a variety of ruthless gangs in the filthy slums and menacing alleys of Grant City, each with their own unique abilities and fighting style that will test his resolve to crush their murderous stranglehold.

Two Playable Characters
Satisfyingly Brutal Disarms/Takedowns: In the face of danger, turn your enemies' weapons against them with aggressive disarms or execute all-new lethal takedown moves
Fluid Combat System: Seamlessly blends ranged combat with most robust brawling system ever seen in a shooter! Pump enemies full of bullets or destroy them up close...the choice is yours
Intense Hand-to-Hand Combat: Take on enemies with branching combos and counters or throw them into each other
Fast-Paced Gunplay: Shoot it out from cover, blind-fire around corners and use enemies as agile human shields for dynamic cover
Captivating Neo-Noir Storyline: Take on the Grant City underworld as vice-cop Jack Slate in an in-depth, character-driven storyline combining classical storytelling with advanced game design techniques to immerse the player in a compelling journey
PostTweetShare Share with WhatsApp Share with Messenger
Community Updates
ShopTo DealsShopTo discount code
New Comment SubscribeSave for later
6 Comments
23rd Jul 2012
Good price, I rented this last year and quite enjoyed it. Very tempting!
23rd Jul 2012
Poor game, almost a fighting game as weapons are almost useless.
23rd Jul 2012
o.o.s
24th Jul 2012
This is in the 4 for £20 offer on blockbuster marketplace for anyone who is interested
24th Jul 2012
Very underrated game, I had a lot of fun playing through this, easily worth £6.85, I paid £30 for it on release day and no regrets.
27th Jul 2012
only ps3 version left now