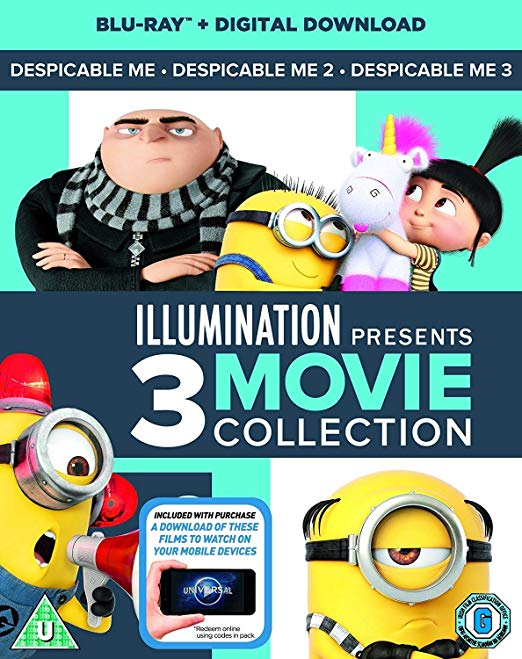 Triple bill of computer-animated comedy adventures. In 'Despicable Me' (2010) serial villain Gru (voice of Steve Carell) hatches a plan to steal the moon, aided by his army of genetically altered corn pops. About to set his dastardly plan in motion, and bristling with his arsenal of freeze-rays and sci-fi gadgetry, all goes according to plan until the arrival at his door of three little orphan girls, Margo (Miranda Cosgrove), Agnes (Elsie Fisher) and Edith (Dana Gaier), in search of a father figure. In 'Despicable Me 2' (2013), after settling down to a life of domestic bliss in suburbia with adopted daughters Margo, Agnes and Edith, Gru's world is turned upside down when he finds himself abducted by agent Lucy Wilde (Kristen Wiig) of the Anti-Villain League on the orders of boss Silas Ramsbottom (Steve Coogan). All is not what it seems, however, for with the world threatened by a supervillain known as Eduardo (Benjamin Bratt), it falls to the unique talents of Gru and his Minions to step up to the plate and save the day. Finally, in 'Despicable Me 3' (2017) Gru is tasked with taking down a new enemy in the form of former child star Balthazar Bratt (Trey Parker). Having grown up to become obsessed by the eccentric character he played in the 1980s, Bratt has hatched a scheme for world domination and will seemingly do anything to achieve his goal. With the fate of the world hanging in the balance, it once again falls to the unique talents of Gru and his Minions to save the day.
PostTweetShare Share with WhatsApp Share with Messenger
Community Updates
Amazon DealsAmazon discount code
If you click through or buy, retailers may pay hotukdeals some money, but this never affects which deals get posted. Find more info in our FAQs and About Us page.
New Comment Subscribe Save for later