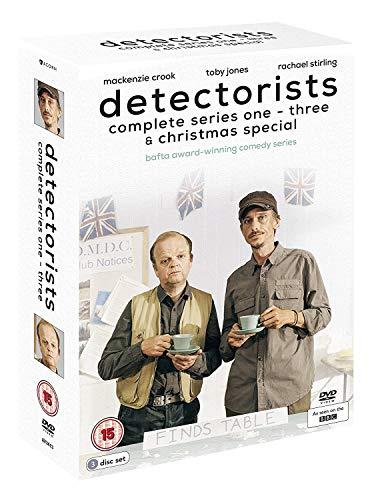 Product DescriptionWritten and directed by Mackenzie Crook, 'Detectorists' follows friends Andy and Lance who find common ground as part of the Danebury Metal Detecting Club. Contains all 18 episodes plus the 2015 Christmas Special.

SynopsisFeaturing all three series along with the Christmas Special, Mackenzie Crook and Toby Jones are Andy and Lance, two friends who find common ground as part of the Danebury Metal Detecting Club. Their dream is to find a buried treasure that will change their lives. But while they search for the past, they must also deal with the present. Series One finds Andy trying to keep his head above water with his partner Becky (Rachael Stirling), while Lance tries to win back his ex-wife, from the local take-away pizza manager. Both of them face an invasion of their turf by rival detectorists the Antiquisearchers. Series Two takes place a year down the road from where we last left Andy and Lance, both of whom are still tripping over emotional molehills in search of the great ‘find’; and the DMDC are on a mission to track down a long-lost WW2 bomber – followed closely by ‘Simon’ and ‘Garfunkel.’ Series Three sees Andy and Becky moved temporarily into the house of her mother (Diana Rigg) while Lance is trying to kickstart his relationship with a new girlfriend – not helped by the re-appearance of his exwife. Meanwhile the friends’ search for gold continues as they face challenges old and new.
PostTweetShare Share with WhatsApp Share with Messenger
Community Updates
Top comments
28 Comments
Post a comment