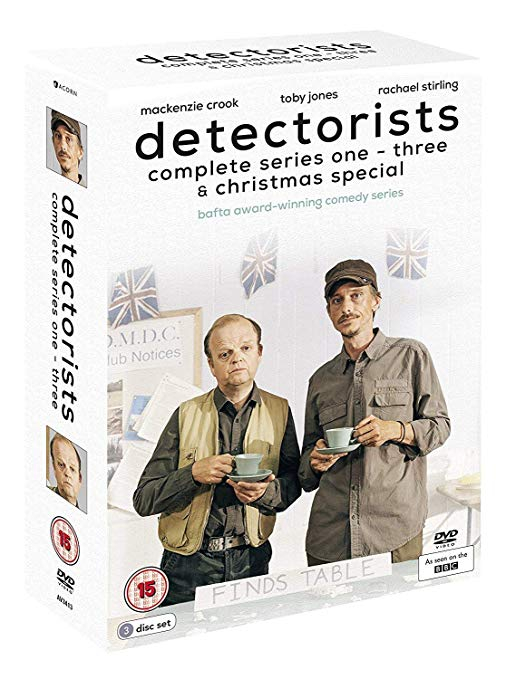 Featuring all three series along with the Christmas Special, Mackenzie Crook and Toby Jones are Andy and Lance, two friends who find common ground as part of the Danebury Metal Detecting Club. Their dream is to find a buried treasure that will change their lives. But while they search for the past, they must also deal with the present. Series One finds Andy trying to keep his head above water with his partner Becky (Rachael Stirling), while Lance tries to win back his ex-wife, from the local take-away pizza manager. Both of them face an invasion of their turf by rival detectorists the Antiquisearchers. Series Two takes place a year down the road from where we last left Andy and Lance, both of whom are still tripping over emotional molehills in search of the great ‘find’; and the DMDC are on a mission to track down a long-lost WW2 bomber – followed closely by ‘Simon’ and ‘Garfunkel.’ Series Three sees Andy and Becky moved temporarily into the house of her mother (Diana Rigg) while Lance is trying to kickstart his relationship with a new girlfriend – not helped by the re-appearance of his exwife. Meanwhile the friends’ search for gold continues as they face challenges old and new.
PostTweetShare Share with WhatsApp Share with Messenger
Community Updates
Amazon DealsAmazon discount code
New Comment Subscribe Save for later
13 Comments
7th Jan
Cold. Bought this for just over £15 in july. Didn't want to pay that for DVD but not available on blu-ray.
7th Jan
its a great show, really enjoyed it. is it a good deal at this price? don't know
7th Jan
Who still buys physical discs? Don't see the point these days, especially at this price!
7th Jan

As opposed to streaming?
7th Jan
My favourite comedy show. Subtle and brilliantly acted, but why is it still not available on Blu-ray?
7th Jan

It isn't on Netflix or Prime, so that might be a reason. I was given the box set for Christmas, very watchable in the gentle English humour category. (Yes, I know it is available on Prime, at an additional cost of £10.99 per season)
Edited by: "The_Name_With_No_Man" 7th Jan
7th Jan
One of the best comedies the beeb has ever done in my opinion.....subtle humour, excellent characters all well put together.
7th Jan
Really enjoyed this tv series.
7th Jan
It's free on iPlayer at the moment.
7th Jan

It's free on iPlayer at the moment.

Not free. You have to pay £154.50 a year for iPlayer.
7th Jan
brilliant show well worth 20 quid hot from me
7th Jan
Just started watching this on iPlayer and really enjoying it.

Wouldn't pay £20 for the DVD boxset, but thoroughly recommend watching it on the iPlayer