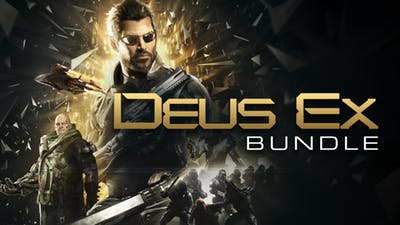 It's time to immerse yourself in the augmented world of a multi-award-winning franchise with the Deus Ex Bundle. This exclusive tiered collection features three gripping first-person, action-adventure titles from Eidos and Ion Storm.

Visit the year 2052 and experience where it all began with Deus Ex: Game of the Year Edition. In a futuristic world filled with terrorists, conspiracies and dangerous figures, you'll take on the role of lead protagonist JC Denton, a rookie agent for the United Nations Anti-Terrorist Coalition (UNATCO).

Develop your skills, augmentations and weapons as you delve deeper into a dangerous world.

Set 20 years after the original game, Deus Ex: Invisible War follows the great 'Collapse' with several factions attaining power and influence across the world. Take control of Alex D as he is evacuated from Chicago to Seattle following a terrorist attack - and get ready for another cyberpunk-esque feud with evil organizations.

Choose Tier Two of the Deus Ex Bundle to explore all three titles with the addition of Deus Ex: Mankind Divided. Reprise your role as Adam Jenson in this stealth action-adventure, in a time where augmented citizens have now been segregated from the rest of civilization.

Use the melee takedown system with both lethal and non-lethal options, and visit black-market vendors to get much-needed supply equipment, materials and weapons in exchange for credits.
PostTweetShare Share with WhatsApp Share with Messenger
Community Updates
Fanatical DealsFanatical Discount Codes
New Comment Subscribe Save for later
1 Comment
20th Feb
Strange that it's missing Human Revolution.