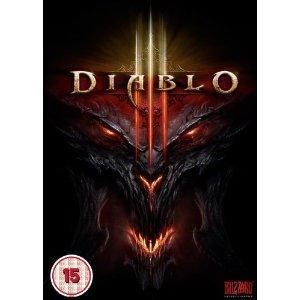 Diablo III is the definitive action role-playing game, and a true continuation of the Diablo series.

Players will create a male or female hero from one of five distinct classes - barbarian, witch doctor, wizard, monk, or demon hunter - each equipped with an array of spells and abilities. As these heroes adventure through rich and varied settings, unraveling an epic storyline and engaging in combat with hordes of monsters and challenging bosses, they’ll grow in experience and ability and acquire items of incredible power.

The game takes place on Sanctuary, a world of dark fantasy. Unbeknownst to most of its inhabitants, Sanctuary was saved some twenty years ago from the demonic forces of the underworld by a few brave and powerful heroes. Most of those warriors who directly faced the armies of the Burning Hells - and were fortunate enough to survive - went mad from their experiences. And most of the others have buried their haunted memories and pushed the horrors from their thoughts. In Diablo III, players will return to Sanctuary to confront evil in its many forms once again.

Diablo III will be a fitting sequel to Diablo II, with the easy interface, fast-paced action, and visceral gameplay that Diablo players have come to expect and enjoy. It will also include many new features that will take the Diablo action-RPG experience to the next level.

Five powerful character classes to choose from, including the barbarian, witch doctor, wizard, monk, and demon hunter.
Brand-new 3D graphics and physics engines enhanced with spectacular visual effects.
Numerous indoor and outdoor areas detailing new regions in the world of Sanctuary.
Interactive environments with dangerous traps and obstacles, and destructible elements.
Randomly generated worlds bolstered by scripted events for endless and dynamic gameplay.
Vast assortment of fiendish monsters, with unique attack patterns and behaviours.
New quest system and character-customization options for the ultimate action RPG experience.
New runestone items that let players change how their abilities look and function, allowing for nearly limitless skill customisation.
Multiplayer functionality over Battle.net with support for cooperative and competitive play.
Four different difficulty settings - Normal, Nightmare, Hell, and Inferno - that progressively increase the challenge and reward players with more powerful armor, weapons, and runestones.
Hardcore mode for players who seek the thrill of constant peril that comes with the possibility of permanent death for their character.
PostTweetShare Share with WhatsApp Share with Messenger
Community Updates
Amazon DealsAmazon discount code
If you click through or buy, retailers may pay hotukdeals some money, but this never affects which deals get posted. Find more info in our FAQs and About Us page.
New Comment Subscribe Save for later
45 Comments
18th Apr 2012
Cheapest I've seen it. Can't decide whether to get the collectors edition or not. I only want the art book and making of DVD which doesn't seem to be worth and extra £35
18th Apr 2012

I bought the Collector's because I'm a fool, but I can't wait
18th Apr 2012
Yea I've ordered the collectors edition for £55 at GameStop but with deals like this I'm having second thoughts...
18th Apr 2012
Hmmm, keep my Tesco preorder or go with Amazon.
18th Apr 2012
I had pre order with amazon then canceled to go to tesco and now amazn drop the price to the same as I got tesco order.
18th Apr 2012

I spent too much time trying to decide if I should/shouldn't get the collector's edition and missed the gamestop & tesco @ ~£55, ended up odering it the other day from asda direct for £63(£62 if the quidco goes through, its tracked just hoped it gets paid).

not played the first 2 games, the 2nd one + the expansion on the usb at least makes up some of the cost of the c.e over the standard edition for me. just hope the diablo 2 + expansion is windows 7 compatible.
18th Apr 2012
Can anyone else (or everyone else!) see weeks of their lives just vanishing once this is released. . .
18th Apr 2012
Except the game is not made by the same guys who did Diablo 2, and is full of DRM (online only to "avoid piracy") and real money auction house.
With the other superior offerings on the way, I'd say this price is still very expensive. Cold.
18th Apr 2012
On tesco is the same price (games5)+ £2.23 quidco tracked, so overal cheaper.
18th Apr 2012

I'm glad you won't be buying it then, could do without meeting you online.
18th Apr 2012

As did I but haven't Blizzard stopped supplying Game/Gamestop ?

gamestop is different to game, as far as I'm aware its game, gamestation and gameplay(online 'store' shutdown last month) are in the same group.

the game and gamestation websites still showing the standard and c.e for pre-order.
18th Apr 2012
My Order Total is still £29.95 there, what about Pre-order Price Guarantee ?
18th Apr 2012
Heat added. Been looking for a decent price for the normal version.

I'm buying a collectors edition as well as a normal. As much as I'll want to open the CE, I know it'll be worth a few hundred in a few years (seen a CE World of Warcraft going for £1500 on eBay the other day) if it's still sealed.

Yeah, but they're making loads more CE copies of D3 than there were of WoW, so it'll be worth much less... it's just supply and demand. It'll still probably be worth more than you got for it though, if it's in mint condition!
18th Apr 2012

Mine too. Looking through the T&C's...

They don't take the funds until dispatch, and pre-orders can be cancelled at any time.
There's absolutely no reason not to re-pre-order every time a 'new best price' turns up.

Probably not, I think the earliest they dispatch is the day before release and I recently had to wait over a week for a dispatched super saver item to arrive (a game). I recently upgraded my 2 year old pre-order to first class so it arrives on release day.
20th Apr 2012

Which is good, if you think of all those sleepless nights mid-week if it was delivered on the 15th, which is Tuesday
20th Apr 2012

I am going to test hardware to make sure it is ready for the release ...