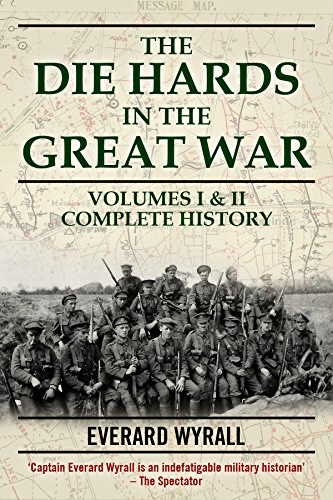 Die-hards in the Great War: Volumes I & II Kindle Edition 99p at Amazon


So cried Colonel Inglis, commander of the 57th Regiment of Foot as he lay wounded at the Battle of Albuera in 1811.

It was the battle cry that led to the Middlesex Regiment’s enduring name: The Die-Hards. And it was a reputation the men of the Middlesex regiment would take into the trenches.

“Men, we can only die once: if we have to die, let us die like men — like Die-Hards.” Said Second Lieutenant R P Hallowes during the First World War, echoing the sentiment of two-hundred years before.


Forty-six Middlesex battalions served at home and abroad in the First World War.

Now, more than a hundred years on, their legacy continues in this book, which documents the unimaginable bravery shown by these battalions.

Written shortly after the war, The Die-Hards in the Great War is an unflinching look at the price the Die-Hards paid for their country and for each other.

Documenting the harrows of trench warfare as well as the awards and commendations won, any reader will find themselves drawn into this book and astonished by the brave actions of these young men.


Volume II begins with the German retreat to the Hindenburg line in 1917 and follows the regiment to the end of the war.

After victories at Arras and Messines, the regiment were then bogged down in the now infamous fields of Passchendaele.

In 1918 the Die-Hards found themselves defending against the great German Offensives.

In the summer of 1918 the British Army pulled out of the trenches and the Die-Hard’s were plunged into mobile warfare.

Battalions of the Die-Hards also served in Italy, Salonika, India, Mesopotamia and Palestine.

When peace came, the fight was not over for one company of the Die-Hards. Civil War in Russia took these men to the doomed Murmansk Campaign…

Each battle had its own acts of extraordinary bravery or kindness, in what must have seemed like the end of the world.

‘Captain Everard Wyrall is an indefatigable military historian.’ – The Spectator

‘It is a record of patience and determination, of self-sacrifice and bravery.’ – Field Marshal George Francis Milne

Everard Wyrall (1878-1933) served in the Boer War, the First World War, and the Third African War. He was an author, journalist, and historian who contributed significantly to the literary commemoration of First World War, compiling extensive official military histories, including, among others, those dedicated to the Somerset Light Infantry, Middlesex Regiment, King’s Liverpool Regiment, and West Yorkshire Regiment.
PostTweetShare Share with WhatsApp Share with Messenger
Community Updates
Amazon DealsAmazon discount code
If you click through or buy, retailers may pay hotukdeals some money, but this never affects which deals get posted. Find more info in our FAQs and About Us page.
New Comment Subscribe Save for later
1 Comment
1st Dec 2019
Alas, Archduke Franz Ferdinand won't be joining us for the rest of his life