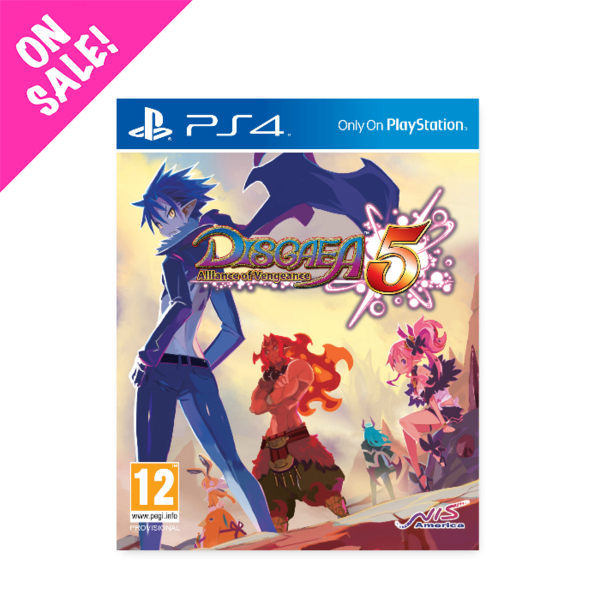 Deal of the week.

The sixth home console entry to the legendary Disgaea series tells a tale of revenge, and of rebellion. As a new and terrible Overlord named Void Dark seeks to enslave the countless Netherworlds, one young demon has stood to end his reign-Killia. In Disgaea 5, lead Killia and his tenacious army of rebels on their dark and dangerous path to vengeance. Filled with more over-the-top action and hilarious writing than ever before, Disgaea 5's damage numbers are surely headed for the record books.
PostTweetShare Share with WhatsApp Share with Messenger
Community Updates
NIS America (NISA Europe) Deals
If you click through or buy, retailers may pay hotukdeals some money, but this never affects which deals get posted. Find more info in our FAQs and About Us page.
New Comment Subscribe Save for later
10 Comments
9th Dec 2019
Nice one! Still hunting for a trails of cold steel 3 Thors military edition on ps4
9th Dec 2019

They do occasionally "find things from the bottom of warehouse". Keep an eye on their site.
9th Dec 2019

You are the second person asking about it within the past few days. @how2 made a purchase from them, let's wait and see how it turns out as I have never bought anything from it myself. They are not a UK retailer, see below:

I've bought from Grooveland before. As @mixmixi mentions, they're based in Germany so allow for delivery time from continental Europe (and expect the EU version of the box). But, aside from that, they've been perfect on the two orders I've placed with them.

If you're desperate to have it now then buy with confidence, my friend.
9th Dec 2019
I was disappointed with their ‘sale’ item last week as it was that Republique that was already £5.99 and they just put it as a sale item.
9th Dec 2019

Talking about sales, did you order anything during Black Friday from them? I ordered one and to my surprise it was delivered in 2 days. I thought people are having issues with deliveries but it was prompt for me. Wondering if the past issues are resolved now?
9th Dec 2019

I think it was just to a preorder game being released around the time the issues arose.

I was one who had the dispatch issue when I purchased Odin Sphere on sale.

But when it arrived I needed to return it. I received another copy literally the next day after I sent the other back. I’ve never had any issues with communication or dealing with in general. Just disappointed with their recent sales. Especially last weeks.

Although I’m tempted to buy Them Witch and Hundred Knight’ if you have any experience with the game?
9th Dec 2019

Ah, nice to know. Witch and Hundred Knight is more of less the same graphical design as Disgaea and is a hack and slash game, if I remember correctly. I think there is a demo of that on PSN, pretty sure I tried it years ago.
9th Dec 2019

Thanks will check it out