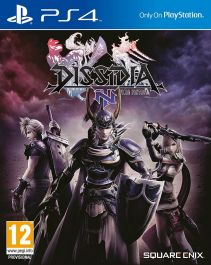 Combining seamless gameplay, FINAL FANTASY characters and breathtaking worlds from the past 30 years of the franchise, DISSIDIA FINAL FANTASY NT welcomes all gamers to the online battle arena with a completely new style of competitive gaming.

Choose from over 20 legendary characters and battle in a 3vs3 arena. Call forth familiar summons like Ifrit, Shiva and Odin to dominate the opposing side or to turn the tide of the battle in each match.

PostTweetShare Share with WhatsApp Share with Messenger
Community Updates
Go2Games DealsGo2Games voucher codes
New Comment Subscribe Save for later
6 Comments
1st May
I had high hopes for this after the successful psp games. But the single player game was underwhelming, I'm sure they made a free version for a while.
1st May

Oh my gawd was the PSP original Dissidia good
1st May
Not sure what the games like not heard a lot about it but the price isn't bad and they've added a lot of extra DLC Characters like Tifa etc might be worth a try
2nd May
Could be worth a punt at this price?
2nd May
Link won’t work for me
4th May
What's the difference between this and the free one?