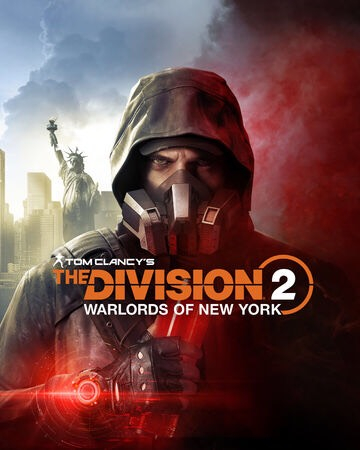 Not the biggest of discounts but every little helps. Cheapest I have seen this on Xbox. Obviously those that don’t own the base game are better to buy the game and dlc bundle which is also reduced at the mo. I’ve had the game since day 1 and loved every minute. Looking forward to this.

Embark on an intense manhunt across Manhattan.

New York is under threat. Aaron Keener, a former Division Agent turned rogue, has taken control of Lower Manhattan, backed by four devoted and highly skilled lieutenants. Trained by The Division but disavowing its ideals, they are now the highest authority in town and the most formidable force the Agents have ever faced.

Play in single-player or online co-op:

- A gripping new story, hunting down your nemesis

- A level 30 boost, allowing you to jump right into the Warlords of New York campaign

- A revamped progression system with a level cap increased to 40

- An extended endgame, including thematic three-month seasons
PostTweetShare Share with WhatsApp Share with Messenger
Community Updates
Microsoft (Microsoft Store) DealsMicrosoft (Microsoft Store) promo code
New Comment SubscribeSave for later
Top comments
17th May
This game honestly gets far harsher criticism than it deserves. Take it for what it is, a really great co-op third person shooter with elements of a looter shooter. The DLC adds seasons (currently in the last 3 weeks of the first 3 months) for the next year as well as 5 new missions and 5 new side missions.
17th May

It has it's bugs certainly, but after playing 300+ hrs now I'd expect to have seen a few and it certainly isn't bad enough to spoil what for me has been a great game to play during lockdown. Probably only 1 or 2 games in 40 years of gaming that I've played more than this one.
21 Comments
17th May
This costs almost 10x what I paid for the base game 🤪
17th May
Dlc for of yet?
17th May
Finally, was waiting for this to be discounted. Thanks OP.
17th May
Really enjoying this, heat added!
17th May
This game honestly gets far harsher criticism than it deserves. Take it for what it is, a really great co-op third person shooter with elements of a looter shooter. The DLC adds seasons (currently in the last 3 weeks of the first 3 months) for the next year as well as 5 new missions and 5 new side missions.
17th May

Will get the PC one on offer at some point. I stopped playing division 2 around a year ago when they started messing with it and my character felt super weak, and broken clan system and broken clan shop mechanics. Went back when they introduced raids, and loved the idea, but again my character felt too weak, so I gave up.
I understand things have massively improved (pun intended) so I will give it a final go when the DLC comes on offer.
17th May

Yeah things have definitely improved, they ditched the gear system and went back to levels which the DLC offers, it still is a number game but its clearer what your numbers mean
17th May
Bugs Bugs Bugs Bugs Bugs that is Division 2
17th May

It has it's bugs certainly, but after playing 300+ hrs now I'd expect to have seen a few and it certainly isn't bad enough to spoil what for me has been a great game to play during lockdown. Probably only 1 or 2 games in 40 years of gaming that I've played more than this one.
17th May
Well I played WONY on day of release and couldn't even go after any of the 4 henchmen before Keener, because I couldn't interact with the community NPC's and I couldn't even interact with the control point NPC's ( IT JUST WORKS ) And Massive have the game now on life support because Red Storm who did all things Dark Zone have moved onto other projects.TERRIBLE GAME WITH TERRIBLE LOOT...
17th May

And those issues were fixed..
18th May

And those issues were fixed..

We we're the beta testers for this game & dlc and paid upfront for the pleasure,Ubisoft & Massive are terrible game companies just watching state of the game and they actually stop people commenting on the issues is a joke just because they don't like criticism.Anything that's good in game gets nerfed into the ground like Hollow mask Contractor gloves & Foxes Prayers kneepads M1A Bakers Dozen,it's a sh×tshow...
18th May
Good to see a discount at last, but I'm tempted to get back into this and drop the £10 in the Brazil xbox store for it instead. I'd stopped playing the game during current events but as lockdown seems to be easing this might actually feel uplifting in a "look how bad it could've been" sense. Still may have a second wave to get passed, though. Not intended as any political comment, just my personal reflection on a previously enjoyable game. Stay safe everyone.
18th May
Quite a good discount considering I spent £30 on launch me and the missus are now doing all the warlord missions!
18th May
The dlc is well worth it and it takes us back to NYC and offers so much content
18th May
Larger rinse repeat. It all looks and plays the same to me. M-o-n-o-t-o-n-y.
I occasionally jump back in, play half an hour or so and then remember why I haven’t played in a while.
Luckily I only paid £6 for the base game which is what it was worth to me.
Oh, and I’d payed £3 for the first one, which is the same game. Didn’t learn my lesson.
Edited by: "iceburglettuce" 18th May
18th May

I paid full price for the first one, and full for the second.
The first one took to patch 1.8 to get right ( it was still a blast and I've clocked around 1000+ hours) and this one's a mess, I found it boring, the UI messy, and gameplay tedious. The raid looks very good, but requires you to join with 7 other dipsticks who refuse to coordinate and waste your time, and ultimately lose.
I might go back in, as it looks like Theres much more change going on finally.

The Devs basically stuck up 2 fingers at the player base after they delivered a true crap fest and refused to fix it.
And I didn't see why I should spent more time playing a crap and broken game.
18th May
Seen this for just under £10 in the Brazil store. Does the Revolut method work for Brazil?
18th May
Terrible price as you will be able to buy the base game with all dlc for half the price in about a month as this game tanked so hard the servers are dead.
18th May