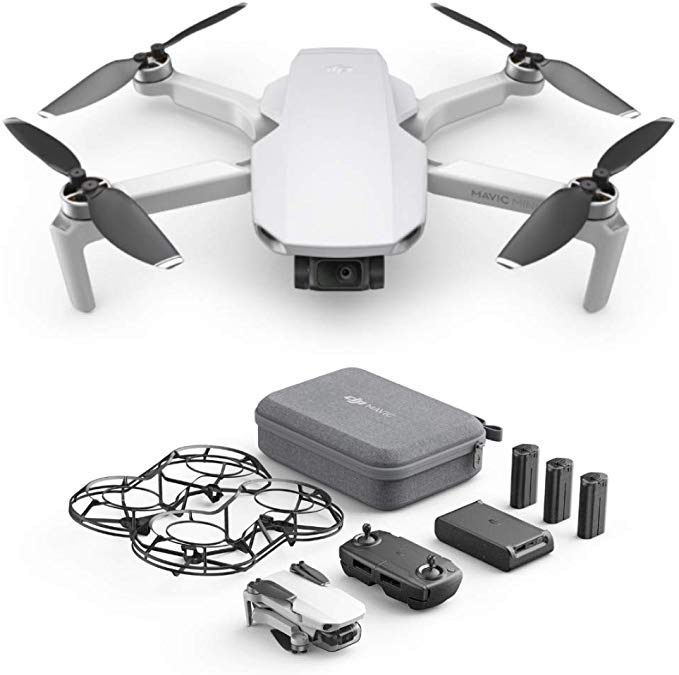 In Amazon Spain they’ll get it back in stock on the 21st Jan, at 499€. If you use one of the fee free cards such as Monzo or Starling this will come down to £425 ish.

Also Amazon Spain provides 2 year guarantee as per their law. Delivery is around 21st-22nd Jan.

Compact and Portable
Weighing under 250 grams, Mavic Mini is almost as light as the average smartphone. This makes it exceptionally portable and places it in the lowest and safest weight class of drones, which in many countries may exempt it from certain regulations. For example, in the United States and Canada, you can fly Mavic Mini without the need to register your drone with the government.

dji arya drone robot flying mode
Easy to Use
The new DJI Fly app offers a simple and intuitive user experience, enabling you to create cinematic shots with just a few taps. It even has Flight Tutorial, a feature to help you get started with Mavic Mini quickly and safely.

dji arya drone robot flying mode
Easy-To-Use Templates
The DJI Fly app offers a variety of Creator Templates that generate awesome videos with just a tap. Even beginners with no editing experience whatsoever can turn any moment into a social media hit.

Remote Controller
A dedicated remote controller maintains an HD, low-latency video feed at a distance of up to 2 km. Detachable control sticks can be easily stored inside the remote controller for added portability.

Extended Flight Time
Mavic Mini’s weight allows it to stay in the air longer than similar consumer FlyCams on the market. Enjoy up to 30 minutes of flight time with a fully-charged battery.

QuickShots
Shots that look like they came from a Hollywood film set are just a few taps away with Mavic Mini’s QuickShot modes, which include Dronie, Circle, Helix, and Rocket. Just select your QuickShot and Mavic Mini will execute an elaborate preset motion while recording. Take the automatically generated short video and share it instantly with friends on social media.

CineSmooth Mode
Slow down Mavic Mini’s flight speed and movements for an added layer of precision and stability. This mode is especially useful when flying in narrow or complex spaces.

Discover Popular Spots
The DJI Fly app gives users integrated access to SkyPixel, a social media platform for users to share their aerial photos and videos. Browse work, share your own, and even discover popular aerial photography spots in your area.
PostTweetShare Share with WhatsApp Share with Messenger
Community Updates
Amazon Spain Deals
New Comment Subscribe Save for later
17 Comments
14th Jan
Good price but if you plan to buy a DJI care refresh it will only cover shipping fees to and from Spain

Just keep in mind that these are only mini drones, not like a Mavic Pro.

It isn't really intended for long distance flying, regardless of what the specs tell you.

I got one with the intention of replacing my Spark but found the Spark a more useful model. I use a Mavic Pro for longer distances. I have since sold on my Mavic Mini. The Mini is a good intro into droning but that's about it.

yeh and certainly not worth this price imho.
14th Jan

I was thinking of doing the same thing (replacing my spark with a mavic mini) would be interested to know your reasons on why you kept the spark over the mini? I must admit I like my spark more (I have original mavic pro) now that I use a cable connection between phone and controller, before I did that I was struggling to get 100-200M without poor signal/image transmission.
14th Jan
£459 at Heliguy with next day delivery, and free repair refresh

how much would repair refresh cost on its own? cheers

Each to their own of course ! - I've had several DJI drones Phantom 2, 3, Inspire 1, Mavic Pro, Spark, Mavic 2 Zoom & Pro, & Mavic Mini. imho the Mavic Mini is way better than the Spark - better image quality, 3 axis gimbal vs 2 on the Spark, longer flight time (30min vs 18 on the Spark), 2.7k video vs 1080, better range - I've already flown my Mavic Mini nearly 3km (ce model). Downsides are: no obstacle avoidance, not compatible with 3rd party apps like litchi, so no waypoints or follow me. fyi - I've kept my Mavic Mini & sold all my other DJI drones.
Edited by: "the-bunker" 14th Jan
14th Jan

how much would repair refresh cost on its own? cheers

I guess it comes down to how you intend to use your drone - if long distance / range flying is important to you then perhaps the Mini is lower on the list with Wifi connection.. but this should only be an issue if you’re flying in a heavily populated area with lots of Wifi signal interference, in open countryside is where the tolerances of the mini can be tested.

Personally I think the small form factor and relatively low price lends to it being fun and that should be your primary motivation but you can also throw in some buyers justification - the potentially useful footage you get from throwing a Mini up at a friend/family wedding or similar occasion is decent quality and nothing to be sniffed at.
14th Jan
The main advantage comes into effect 1st July when new CAA regs come into force (CAP1789) - drones under 250g can fly over 'uninvolved' people (but not crowds) & there is no mention of minimum distance to buildings, etc. You still can't fly in NFZ & of course you need to check all the local laws, etc.
14th Jan

Weird, this guy gets it to go 3.4 miles away

youtu.be/aBX…wXc
14th Jan
I love my spark so no need to change yet. Thanks 🍺
15th Jan

Weird, this guy gets it to go 3.4 miles away https://youtu.be/aBXS2m9xwXc

He’s not using the weaker CE model. Plus he’s flying in a very open area.

Didn't realise they came in different models. I thought you could just change from CE to FCC via Android FakeGPS?
16th Jan

Not sure if that method is working on the mini