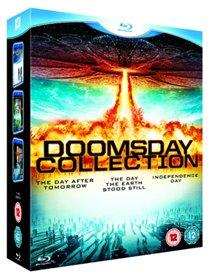 £3.80£6.9946%Rarewaves Deals
6
Get deal*Get deal*
6Get deal*Get deal*
341°
Doomsday Collection (Blu-Ray) - £3.80 Delivered (The Day The Earth Stood Still / The Day After Tomorrow / Independence Day) @ Rarewaves
£3.80
Posted 18th Oct 2020
Triple bill of global disaster movies. 'The Day the Earth Stood Still' (2008) is a remake of the 1951 classic sci-fi film about an alien and a giant robot who visit Earth. Keanu Reeves stars as Klaatu, the inhabitant of a flying saucer that lands in Washington DC after orbiting Earth. Along with Gort, his indestructible robot companion, Klaatu sets out to discover all he can about this strange planet and its peculiar inhabitants. Along the way he meets Helen Benson (Jennifer Connelly) and her son Jacob (Jaden Smith), who become his only real friends and end up saving his life. Kathy Bates and John Cleese co-star. In the sci-fi epic 'The Day After Tomorrow' (2004), directed by Roland Emmerich, global warming and the greenhouse effect have given rise to abrupt climate change with cataclysmic consequences for the entire planet. Dennis Quaid stars as Professor Adrian Hall, a paleoclimatologist who is fighting to save the world from a second ice age and all the natural disasters that herald it: floods, hurricanes, earthquakes and tornadoes, to name but a few. But first, Hall must complete a more personal mission: his son Sam (Jake Gyllenhaal) is stranded in New York City where he was taking part in a school competition when the catastrophe began. As well as facing a perpetual onslaught of natural catastrophes, Hall must fight his way through the mass of humanity fleeing south into warmer climes... but can he reach his son in time to save him? Will Smith, Bill Pullman and Jeff Goldblum star in 'Independence Day' (1996). When massive spaceships appear, hovering above planet Earth, the world stands in awe and wonder. This soon turns to terror as the aliens launch an all-out attack, devastating the planet. The survivors, led by American President Thomas J. Whitmore (Pullman), decide to fight back. The traditional B-movie format is updated for the 1990s, making it one of the biggest box office smashes of all time.
PostTweetShare Share with WhatsApp Share with Messenger
Community Updates
Rarewaves Deals
New Comment SubscribeSave for later
6 Comments
18th Oct
spaces, please spaces!
18th Oct

In the description?
18th Oct

I'm just a volunteer pal, it is a wall of text though. I checked a couple of sites to see if I could get a better one
18th Oct

18th Oct
I think this is a good deal, bought.. Have some heat