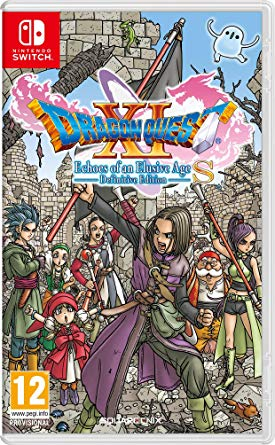 Ready for a grand adventure filled with memorable characters, an enchanting story and classic RPG gameplay that can be taken on the go? This definitive version of the critically acclaimed game features the same sprawling content of the original, but with character-specific stories, fully orchestrated field and battle music, and the ability to switch between not only between HD and retro-inspired 16-bit visuals, but also Japanese and English voice track.

Features & details
PostTweetShare Share with WhatsApp Share with Messenger
Community Updates
Amazon DealsAmazon discount code
New Comment SubscribeSave for later
14 Comments
24th Mar
Must buy.
24th Mar
The soundtrack for this game is phenomenal. The game itself is great, but it's the music that really makes it stand out for me.
24th Mar
Started playing this recently. It's a truly great game with so much effort put into it. Worth every penny.
24th Mar

I just wish it was more varied, the over world theme is repetitive I think
24th Mar
I 100%'d this on steam...really want the updated handheld version though.
25th Mar
Great game got over 100hrs with it inc side quests
25th Mar
Some how when I ordered it gave me a £5 off voucher as well, so £29.99 for me. burning hot 🔥
25th Mar
One of my favourite games on Switch. If you're looking for a game that you can lose yourself in for a very long time, this is it.
25th Mar

The soundtrack is easily the most disappointing thing about this fantastic game. It is so repetitive and there are no memorable tracks.
Edited by: "Richyroo" 25th Mar
25th Mar
Decent game, lots of hours, just too damn easy.
25th Mar
There is a demo of this on the eShop if you want to try it out first
25th Mar

That's why the modifiers exist.

The game is absolutely brilliant, I'm not sure if I prefer this or Xenoblade 2.
25th Mar

Ha!
25th Mar
Would love to get this but delivery with Amazon Prime is like 2+ weeks now Ordered stuff a week ago and it says delivery is saturday.