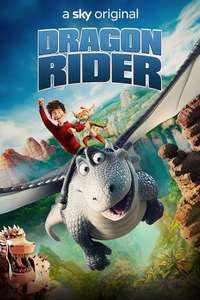 Next best is £2.49 (SD) at Amazon/Google/Microsoft. Good price if you don't have Sky Cinema. 70% Rotten Tomatoes score. Also known as Firedrake: The Silver Dragon (on US Netflix).

Dragon Rider, a Sky Original, tells the story of Firedrake (Thomas Brodie Sangster), who wants to show the older generation he is a real dragon, not the naïve fledgling they see him as. When he discovers that humans are about to destroy the forest where the dragons reside, he sets off on a daring crusade with his best friend Sorrel (Felicity Jones) in search for a mythical safe haven hidden in the Himalayas where dragons can live in peace. On their quest, they encounter Ben (Freddie Highmore), an orphan, who they mistake for a dragon rider destined to help them on their voyage. The unlikely trio must learn to work together, despite their differences, as dragon eating villain Nettlebrand (Patrick Stewart) is hot on their tails to fulfil his own quest: to track and destroy every dragon.
PostTweetShare Share with WhatsApp Share with Messenger
Community Updates
1 Comment
Post a comment