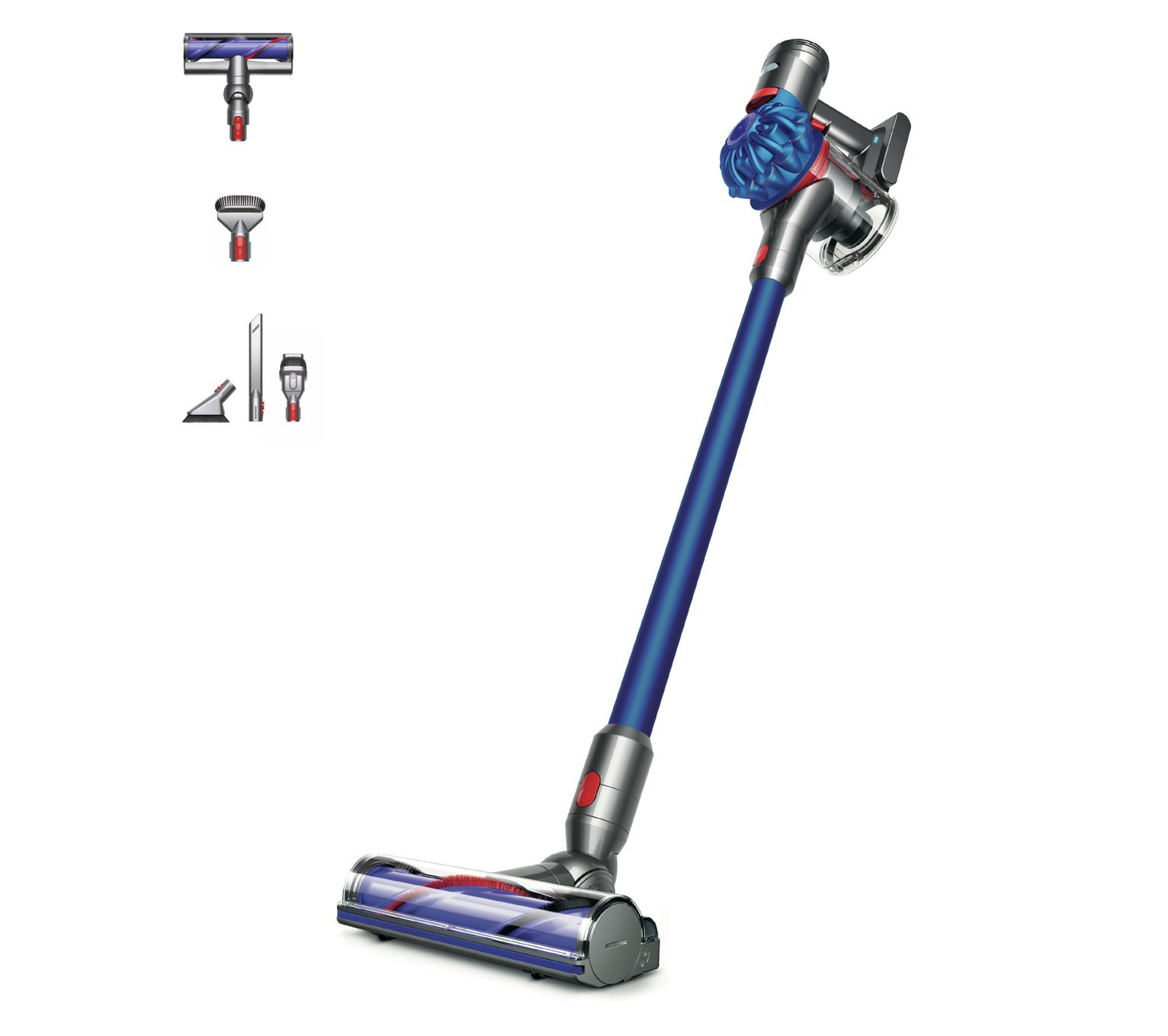 
LIGHTWEIGHT. CORDFREE. POWERFUL DYSON SUCTION REMOVES DIRT FROM AROUND THE HOME.
KEY BENEFITS OF PATENTED DYSON TECHNOLOGY
Powerful suction
No cord, no hassle
Lightweight
POWERFUL SUCTION
Powerful, whole-home cleaning for up to 30 minutes1.
NO CORD, NO HASSLE
No cord to hold you back. Perfect for quick and thorough cleans.
LIGHTWEIGHT
Only 2.21kg.
No loss of suction
Dyson Digital Motor V7
Max power mode
NO LOSS OF SUCTION
V7 Motorhead delivers the same high dust pick up from start to end of the cleaning session.
DYSON DIGITAL MOTOR V7
Engineered for powerful suction on carpets and hard floors.
MAX POWER MODE
Provides up to 6 minutes of higher suction for more difficult tasks.

ENGINEERED TO DEEP CLEAN AROUND YOUR HOME PROPERLY. THE DYSON V7 DIGITAL MOTOR PROVIDES ENOUGH POWER FOR UP TO 30MINUTES OF CLEANING, SO THAT YOU DON’T HAVE TO MISS A SINGLE SPOT.
KEY FEATURES
30 minutes run time
2 year guarantee
Transforms to handheld to tackle pet hair
30 MINUTES RUN TIME
Up to 30 minutes fade-free suction with cord-free versatility to clean your whole home. 1
2 YEAR GUARANTEE
Supported by Dyson experts. Genuine Dyson parts or repairs if something goes wrong during your guarantee period.
TRANSFORMS TO HANDHELD TO TACKLE PET HAIR
Cordfree and lightweight. Easy to clean the stairs, car and the sofa.
Hygienic bin emptying
2 Tier Radial™ Cyclones
Always on hand
HYGIENIC BIN EMPTYING
Eject dust in a single action.
2 TIER RADIAL™ CYCLONES
15 cyclones create strong centrifugal forces, to capture microscopic dirt.
ALWAYS ON HAND
The wall-mounted charging dock recharges your Dyson V7™ vacuum. So it's ready whenever you need it, and easy to store as soon as you've finished.
HELPS REMOVE DIRT AND PET HAIR FROM AROUND THE HOME

DIRECT- DRIVE CLEANER HEAD TO DEEP CLEAN CARPETS
A powerful motor inside the brush bar drives stiff nylon bristles deep into carpet pile to remove ground-in dirt. Soft anti-static carbon fiber filaments remove fine dust from hard floors.
PostTweetShare Share with WhatsApp Share with Messenger
Community Updates
Argos DealsArgos discount code
If you click through or buy, retailers may pay hotukdeals some money, but this never affects which deals get posted. Find more info in our FAQs and About Us page.
New Comment Subscribe Save for later
30 Comments
2nd Dec 2019
15% Quidco today too so that’s £170. Not bad but wish I hadn’t missed the offer dyson had on the refurbed version.
2nd Dec 2019
Wonder if I can use my corporate 5% discount on Argos e vouchers along side this.
2nd Dec 2019
Any idea if this model is a which best buy?
2nd Dec 2019
Is this anti allergen does anyone know?
2nd Dec 2019
oos?
2nd Dec 2019

All Dyson vacuums from v7 to v11 are which best buys.
2nd Dec 2019
out of stock in store and delivery
2nd Dec 2019
Still stock in Lanark, Scotland for anyone who wishes to venture into the wastelands!
2nd Dec 2019
Not in stock anywhere in Northern Ireland
2nd Dec 2019

The V7 is Dyson’s main entry-level cordless vacuum cleaner. It sits between the Dyson V6 and V8 ranges. The V6 is officially discontinued but tends to make a comeback during sales events. That aside, the V7 is usually the cheapest Dyson cordless vac you can get.

The V7's 28-minute battery life sits between the relatively short 20-minute run time of the V6 and the V8's 32 minutes. The V7 has two power settings - standard and turbo. When you use the turbo power mode, the battery lasts for only seven minutes, and it takes just over two and a half hours to fully recharge.

This Dyson weighs 2.4 kg, which is about average for a cordless vacuum cleaner, but much lighter than any corded alternative.

Like all Dyson cordless vacuums, this one has a detachable handheld unit that's great for using in hard-to-reach places. This Motorhead model is the most basic one. It's the same as other V7 models but you get less accessories. It comes with the basic crevice and upholstery tools, and a main floor cleaning tool that is suitable for both hard floors and carpets, but for extras such as a mini turbo tool you'll need to opt for the Animal model.

Dyson says the V7 has a more hygienic bin-emptying system. When you empty the vacuum, a dust ejector, which is a kind of silicone sheath, wipes down the inside of the dust container and pushes out dirt and fluff that you might previously have had to fish out with your hands.

What's it great at?

The V7 is good at cleaning carpets, good at sucking up any type of debris from flat laminate floors, and fantastic at cleaning in deep crevices.

It's also one of the best cordless vacuum cleaners around for sucking up any type of hair or fibres.

You needn't worry about using the Dyson V7 on its standard power setting - unlike many cordless vacuum cleaners, this one can still clean effectively with the power on its minimum setting.

The Dyson V7 is also a joy to use. It's an incredibly versatile cleaner, suitable for almost any vacuuming task.

Is there anything I should watch out for?

Not really, this is one of the best cordless vacuum cleaners around.

Is there anything else I should know?

A small number of our members who own a cordless Dyson have told us they don't think the hygienic bin-emptying function on this machine is much of an improvement on older Dyson models that don't have it.

Should I buy it?

Yes, it’s an excellent cordless vacuum. However, it's not much of an improvement on the Dyson V6, which you might be able to find for less. The only real drawback of the V6 compared with the V7 is the shorter run time and the absence of the bin-emptying feature. If neither of these things bother you, then opt for the V6 - if you can find it.


For advice on getting the best price on a Dyson cordless vac, and to see the latest deals we've spotted, see our Dyson deals guide.
2nd Dec 2019
One of these or the equivalent Shark?
2nd Dec 2019

One of these or the equivalent Shark?

Probably Shark - as the likelihood of finding this deal anywhere is slim.
2nd Dec 2019

Doesn’t for me [Image]

I do have premium membership

Same here. Logged out and back in and still 10%
5th Dec 2019
Managed to get the v7 refurb from dysons eBay outlet today (£149.99) that went out of stock a week ago. A random 1 came available. Maybe worth keeping an eye on if your wanting one.
5th Dec 2019
Just noticed this changed from the ‘extra’ model to the ‘pro’ model. Anyone know what is so special about the ‘pro’ version?
8th Dec 2019
Ordered through Quidco at the time of the deal while the offer was live and tracked at zero cashback. Complained to Quidco and they stated that this not in its cashback offer Quidco reply below

Sadly this seems to have tracked at £0.00 cashback which is where the purchase has been deemed ineligible for cashback by the retailer at the point of purchase.

This can be if you buy something not covered by the cashback rates or if you breach the T&C's in some way.

Sadly we would not receive anything on this one.

I am sorry for any disappointment.

To be eligible for cashback according to Quidcos T&C's you had to either buy online and have it delivered or buy online then collect it in store - if you paid in-store it wouldn't track
8th Dec 2019
Paid online and collected instore. Followed the T&C' to the letter
8th Dec 2019
Quidco did exactly the same with me on an Ali-Express deal
11th Dec 2019
Looks like we'll have to wait for another Dyson deal