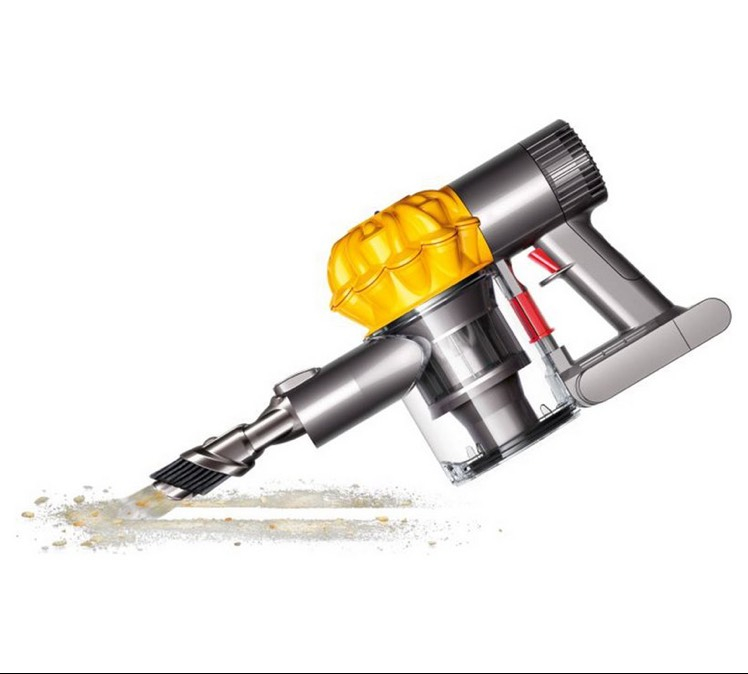 The V6 Trigger handheld vacuum cleaner is powered by the Dyson digital motor V6. It has 2 Tier Radial™ cyclones and a fade free battery. These developments enable V6 Trigger to produce twice the suction power of any other handheld in use.

Powered by the Dysondigital motor V6 – up to 3 times faster than conventional motors.

Comes with a combination tool and crevice tool.
21.6 volts.
20 mins running time on full charge.
Variable power.
Total capacity 0.4 litre.
Dustbin full indicator.
Includes includes, combination tool, crevice tool and includes, combination tool, crevice tool.
Size H20.8, W39.5, D14.4cm.
Weight 1.2kg.
Manufacturer’s 2 year parts and labour guarantee.
PostTweetShare Share with WhatsApp Share with Messenger
Community Updates
Argos DealsArgos discount code
If you click through or buy, retailers may pay hotukdeals some money, but this never affects which deals get posted. Find more info in our FAQs and About Us page.
New Comment Subscribe Save for later
Top comments
8th Jan 2018
I also have to say that there’s no way these things are worth £220. A £100 is about the right price for them
39 Comments
8th Jan 2018
It's the standard V6. Has been at this price for a very long time, Cold
Edited by: "zakariyya94" 8th Jan 2018
8th Jan 2018
It’s still one of the best even though it’s a standard one and not a pro. It has been at this price now and then but never for long time. I think it’s the cheapest deal at the moment. Everywhere else the price has gone up.
Edited by: "rehmanfarid_11" 8th Jan 2018
8th Jan 2018
£99 in tesco
picked one up Thursday , very impressed. Breezed through my car
got a hose and brush from eBay for £13 to complete the set up.
8th Jan 2018

Aldi also have this deal, £99 with free shipping
8th Jan 2018
I have a non v6 animal, battery is getting tired can I use all my animal accessories on this retiring the non v6?
8th Jan 2018
Worth getting the full size V6 instead of this? I take it there the same but just with more parts
8th Jan 2018
Has anyone else had an issue with these Dyson handhelds, assume it's with the battery, where it only lasts for a couple of seconds on the Max setting and then stops and then restarts, stops, restarts etc. However, it seems to work normally on the normal power setting.

Sure there is a work around about cleaning the battery terminals that I did with an old DC34, but just noticed it on a newer DC58 and getting tired of the same problem with these Dyson handhelds; luckily the DC58 is still in warranty so going back.
8th Jan 2018

It probably the reason why there’s so many returns to Dyson and they can sell 10k of these machines per EBay listing as “ refurbished” .
8th Jan 2018
I also have to say that there’s no way these things are worth £220. A £100 is about the right price for them
8th Jan 2018

My v6 does this when inside the container there is a layer of dust and hair stuck to the filter piece .
8th Jan 2018

Check the battery contacts. Mine used to do this.
Remove the battery and clean the 3 contacts on the side (not the 2 on top).
Do the same with the 3 inside the handle.
I also used a small long screwdriver to slightly bend the contacts inside the handle so that it makes contact better.
Mine has worked perfect since.
8th Jan 2018

that means it's full or blocked and you need to clean it out. Least that's what ours does.

To potential buyers don't be fooled into thinking you can use this as a normal household vacuum for rooms. it's rubbish. Batter lasts 5 minutes and doesn't even pick anything up. I've had crap asda 20 quid vacuums that have more suction power than this overpriced piece of rubbish.

deleted1336857
8th Jan 2018
Fantastic product, ideal for small spillages where getting the large vacuum out would be a pain. Also car and cat litter scatterings, on Max the battery lasts 6 mins, plenty enough.

The V8 Animal on the other hand, whilst significantly more expensive, is a genuine replacement for a plugin vacuum. Bought 1 in the eBay 20% sale and it's more that powerful enough even on standard mode.
9th Jan 2018

Do you have ebay link for the seller?

Picks up small spillages, can last a full day and has reviews. ?
9th Jan 2018

Doesn't run out of battery, but I found the suction sucks (or rather, doesn't)!
9th Jan 2018
Do you have ebay link for the seller?
makes me wonder if dyson should be providing a similar kit as part of the product!!
9th Jan 2018

Try washing the air filter that is on the top of the machine pull it out rinse it under warm water it worked for me.
9th Jan 2018
£100 for a vacuum cleaner? Madness.
9th Jan 2018
will dc34 handheld accessories fit this v6? Can't find the answer on google and cant watch youtube at the moment.

Why did dyson change the fitting for v8? Is there any other reason than to make more money?
9th Jan 2018

Do you have ebay link for the seller?

I have the V6 animal and it does this when there is a blockage, usually hair or otherwise blocking the hole in the turbine head.

It also does this when using the mini turbine (or other attachment which doesn't have the thing so if fabric to allow air movement) on high power because it thinks there is a block (it creates a full vacuum when flat to the floor) am I have to do is switch back to normal power and works fine.

Might be worth trying with a different attachment or taking out the filter and giving a quick clean. May also be worth removing the plastic duty connector and giving the cyclone bits a good clean, I generally do this about once every six to nine months.
9th Jan 2018
make sure you register for the guarantee.. i didnt and the motorised head stopped after 1.5years and dyson want me to buy a new one at £65. The usage has dropped to 20% of what it was since the motorised head has stopped working
9th Jan 2018

The only difference between the standard one and the pro is the accessories included with it - I think the motorised head is the main one with the pro...and it’s a different colour. The main unit is the same
9th Jan 2018

From what I read, they reversed where the unclip part is on the accessory so you can remove it easier with one hand. Regarding what fits what with regards to backwards compatibility, if you call Dyson they’ll be able to tell you (and usually offer a small discount on a new model!)
9th Jan 2018
Same price Aldi or £100 direct from Dyson. Seems to be a few offers around
9th Jan 2018

Was wondering the same.

And it's worth every penny. These vacuums are so much easier to use than the hulking great big thing we had before. You just grab this out of the cupboard, zip around with it and the vacuuming is done much quicker, easier and quieter than before. It's a revelation. So much so, that I bought the car and boat one for cleaning the cars. Also family members have bought one after seeing ours and are also very pleased.

Yes the V8 is a lot of money for a vacuum (although the £100 for this one isn't really), but it just makes cleaning the house so much quicker and easier. When ours eventually dies we'll certainly be replacing it with another battery-powered handheld. Probably a Dyson again, but even if we went for another brand we'd be expecting to pay over £100 for a decent one.

The only thing I don't like about it is that the battery will probably be done after 2 years if its anything like a mobile phone battery and the run time will get shorter and shorter, necessitating frequent replacement of the vacuum. It charges too slowly to be able to charge it mid way through cleaning the house, which is another shame, although one that is yet to cause much of an issue for us. We just charge it back up after every use.

The big corded Bosch vacuum that we had before still runs fine. I actually just bought the V8 to use for quick mess clear ups, now that we have a small child. However, despite not initially being convinced on the need for a second vacuum, the wife now uses the Dyson V8 exclusively and refuses to drag the big heavy Bosch out of the cupboard. In fact, the Bosch hasn't been used once since the V8 arrived.

Ultimately the Bosch is more powerful (it can literally pull the carpet up), but that extra power isn't needed, and we actually seem to get a better clean with the Dyson because of the motorised heads.
11th Jan 2018
Noticed there is a 4 piece toolkit to fit handheld Dysons on the Argos website . It's £14.99 . The link is here Dyson Accessories . Hopefully it will help someone .
12th Jan 2018
Will the Dyson mini motorised head (Part no. 962748-01) work with this? Dyson Link
13th Jan 2018
Just got mine 😁
4th Feb 2018
The link now takes you to one price £219.