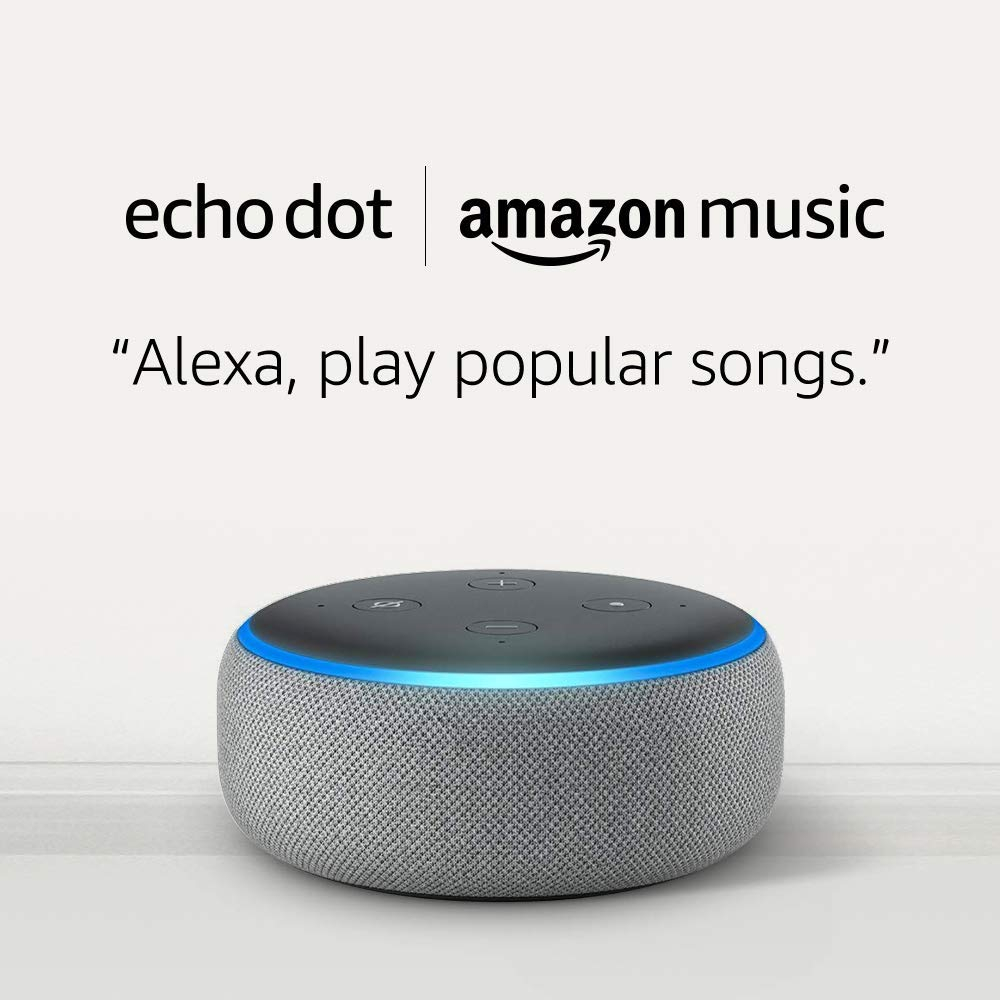 The same question can be asked when purchasing any item, its personal preferences. Maybe people already have a Alexa device and want to add to it. Who knows what goes on in peoples minds ‌
30 Comments
5th Jan
Wish they would match the google deal at £19
5th Jan
Good deal.

Well, that's not what Currys/spotify's t&c's say....LINK
'Get 6 months of Spotify Premium for free. Auto renews at £9.99 / month after.'
I would be interested to know if it actually IS no auto renew as I have 2 x 6 month codes.
Edited by: "Stormpooper" 5th Jan
5th Jan
This is a genuine question, not trying to mock buyers of this.... But why would anyone pick Alexa over Google in terms of assistant? From my experience Google is miles ahead in quality of responses
5th Jan

The same question can be asked when purchasing any item, its personal preferences. Maybe people already have a Alexa device and want to add to it. Who knows what goes on in peoples minds ‌
5th Jan

Wish they would match the google deal at £19

well that's for the google mini 1st gen )£19} not the google nest mini 2nd gen ,which is equels the amazon echo dot 3rd gen in sound and performance and the echo is 24 quid cheaper.
5th Jan

I got the dot before google, I’m also sure I can’t do Apple Music via google yet? Is that correct?
5th Jan

I neither have google home or Apple products. Have a multitude of dots , echos and smart devices they connect into. Although the article posted is one from tech radar that seemed to be a balanced take on comparing the two eco systems and the nexus of what Rami, if not mocking, was asking .
5th Jan
good price for hardware Plus 4 month worth of music
5th Jan

I bought an item from currys that qualified for 6 months spotify. 2 months and 4 emails later I still don't have the code.
5th Jan

Why Google is miles ahead? Genuine question.
5th Jan

Why Google is miles ahead? Genuine question.

My personal experience/opinion is that Google is better than Echo devices. It understands questions better and gives better Web results. From what I understand, Echo devices are better at automation but I don't have any issues with mine using a combination of branded and random/generic smart products + IFTTT.
5th Jan
Cheeky
6th Jan
Not a great deal as you can still get 4 months Amazon Music Unlimited for 99p (not £31.96 as stated) and the dots have been this price (or lower) for a while now
6th Jan

People aren’t willing to spend time looking at reviews for something that costs £20-25 and will use basic criteria to determine which product to buy.
6th Jan
I bought one on boxing day for this price, love it!
I didn't get 4 months free but in my 3 months free previous I barely used it because it is pants so I changed the settings so when I ask for music it plays spotify, I wouldn't use another service.
6th Jan
It'd be nice if Google allowed a different wake up word that was more natural than 'OK Google'. Alexa feels more natural and less of the brand in your face.
6th Jan
Not better than 99p offer haha
Voted hot by the way!
6th Jan
I like how I'm connected to everything via Google accounts and stuff. I just set my Google home up yesterday but pretty dissapointed as Alexa speaker system sounds so much better. Google sounds well cheap
6th Jan
My 10 year old son wants one of these for his birthday. Which one would be best and what are they for? I’m not to keen on the idea as I have heard they listen in on conversations but he wants one.
6th Jan
To anyone who owns two or more echo dots... I have 2 one for one room and one for another I have the app on mine and another persons phone. We were hoping that they could control one from their phone and I control the other, but it’s like they have got confused and intertwined.
6th Jan
Thank you for posting. We have added your thread to the Highlights pages
7th Jan

I can tell you, because I wondered the same and got both. I got an Alexa echo dot for my Dad, and spent a few days with it, and then the google Nest mini 2nd gen came up in a deal with a smart plug so I got that. I thought the google being plugged into all that search would be a benefit but here's what I found.

1. Alexa sounds better - in music it's roughly the same although I'd still pick Echo, but in voice Alexa is just better, smoother, and more natural. Google sounds robotic. You don't notice so much on your phone but you do on the Mini.
1.a I don't know why you would buy two echos for stereo, rather than plugging one into an existing stereo or extra speakers, either way it probably can't hear your commands over the music when placed near other speakers.

2. It gets *really* old saying "hey google" all the time rather than Alexa.
2a. Two other things go against google on this. Alexa has a follow on command so you don't have to say Alexa all the time, it's a little hit and miss, and it's just easier to say Alexa quickly again to be sure, but this is *definitely* something Google needs and should be pretty simple. i.e all that "natural language intelligence" is pretty useless if it's not able to follow on from the previous comment or you have to use the wake word each and every time.
2b. Google has this neat hand sensor thing where as you move towards it the device lights up the controls - for the life of me I cant understand why they don't use this as a hand wave gesture to ask a question *SO* much simpler and easier than saying "HEY GOOGLE" especially when it doesn't get it right and you have to repeat. On phones, like the Pixel, you can use the squeeze gesture, or at least press a button so it seems natural and quicker. The only reason I can think they don't have it, is either this is coming in future (so many features seem to be held back right now, like why can't you pick your own wake word?? Maybe privacy issues but still, it's *your* home.) and the other is that if you don't use your voice google can't track which user you are.

3. Out of the box google try to get you to use google news and "good morning", it will tell you it has these features. Which I can see now is reasonably interesting, gets you overly concerned about the world first in the morning if that's your thing. But it's useful to be listening to and doing your morning routine, I'm sure you can tune it. I'm sure Alexa has the same, but I need to try that out.

4. Alexa has skills but it takes a little exploring, and I think it's geared more to music playback as that's what it's usual bundled with.

5. One annoying thing is the music volume on google can be high, but then the voice is REALLY loud, and I can't say I noticed that on the echo.

idk, I'm considering getting this echo for myself, but I also kinda want to explore google nest more.

:: I think I can conclude atm Echo is the better entertainment device, and easier to use on the daily. Perhaps if google brings more in future that will change.

Plus I already have a 4k fire stick and the remote has been really useful, much more than a phone display. A button to use Alexa sways privacy concerns, but I'm interested to see how echo will tie together. If I can use the fire stick remote to make announcements.

//
Google nest mini Update: turns out Google has a continuous voice mode, but you have to turn on in options. Makes a hell of a lot simpler.
There's also apparently other accents but I've not been able to turn them on so far.
Wall mounting the Google nest mini does improve the sound.
You can add many more google accounts to one home. Which I found a bit weird on Alexa you can't do.

I've just got my echo so I will compare more.
Edited by: "JamesJacked" 8th Jan
7th Jan

That may be true but I'm not sure the end result comes through. Google only ever quotes Wikipediea, and I'm pretty sure Alexa can do that. It actually seems easier to find the music you want on Alexa as well. Google does have the follow on commands for understanding language, but not on it's Nest devices which is a hugely odd choice, and the wake word is a stretch. There are, or should be, fixes but they aren't implemented.
7th Jan

Because it's google!
8th Jan
Google nest mini Update: turns out Google has a continuous voice mode, but you have to turn on in options. Makes a hell of a lot simpler.
There's also apparently other accents but I've not been able to turn them on so far.
Wall mounting the Google nest mini does improve the sound.
You can add many more google accounts to one home. Which I found a bit weird on Alexa you can't do.

I've just got my echo so I will compare more.
Edited by: "JamesJacked" 8th Jan