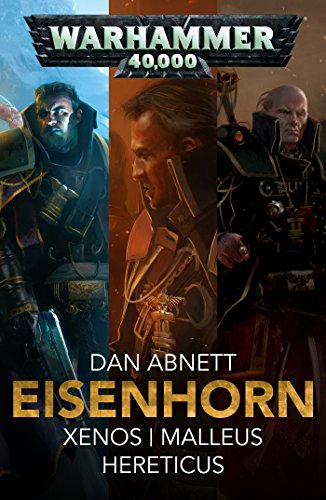 Inquisitor Gregor Eisenhorn is an Imperial inquisitor, one of the tirelss defenders of humanity. With his warband he scourges the galaxy, walking in the shadows of darkness in order to root out heresy. When that heresy is found to infiltrate the hierarchy of the Imperium and the Inquisition itself, Eisnehorn must rely on himself alone to deal with it – even if it means making deals with the enemy and compromising everything he ahs ever believed in.

Spear Of The Emperor

Ciaphas Cain: Defender Of The Imperium

Thank you.
PostTweetShare Share with WhatsApp Share with Messenger
Community Updates
Amazon DealsAmazon discount code
New Comment Subscribe Save for later
6 Comments
1st Feb
Amazing value, thanks.
1st Feb
Heat! The Eisenhorn books are great, recommended reading
1st Feb
One day Felix and Gotrek omnibus 2 will go £1.99 maybe not this year, maybe not next, but one day...
2nd Feb
The Eisenhorn books are great sci-fi, amongst the best 40K books of all time.
2nd Feb