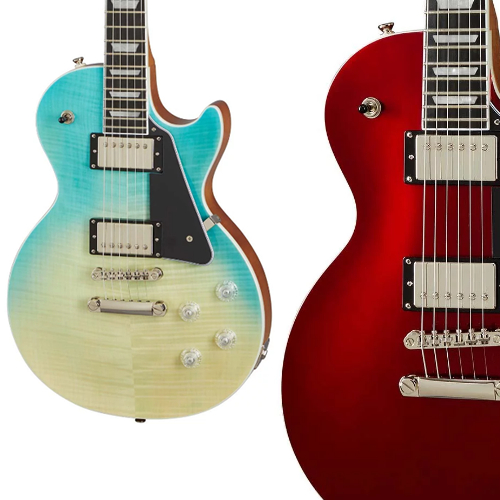 Use code EXTRA10
Note: TL;DR - Use the above code and scroll down for prices / models

The Les Paul has come a long, long way since it's original release. It's an absolute classic shape and has a sound that I personally have loved since I clapped my ears on it when I was little. Over the years we saw more and more variants being released, including Gibson's Epiphone range, which targeted those with a much leaner budget

It seems Epiphone have really been upping their game in recent years, with some really nice releases. Not that they were ever awful, but it's models like this that offer something much different from the previous releases, with a nice set of humbuckers in there to boot. I really liked the plus top models with coil taps and pro-buckers. With each release you'd always see something like "yeah but a Les Paul doesn't have XYZ, keep it traditional" The easy answer to that, is... buy an older model They're still awesome!

Now the brand new Epiphone Les Paul modern is really quite something to look at, and in my opinion is one of the nicest looking Les Pauls that we've seen in a very long time. As you can see in the below images there are a range of finishes, with wait times on the fade models. Typically the fade ones are about £50 more in most places than the standard colour ones, which is fair enough.

You can also see that they've gone with this more natural back with a scooped out neck joint to give you better access to the dirty end of the fret board pretty much what we saw in the High Powered range. What else is pretty cool, is that the Epiphone logo is now using the Gibson style font and I for one think it looks much better than the previous logo.

I won't go on about, even though I could easily do so

Here are the cheapest prices I can find right now on both types of finish:

The Epiphone Les Paul Modern Electric Guitar in Vintage Sparkling Burgundy gives a new look and sound to the world's greatest electric guitar with a price that puts it firmly in the hands of every guitarist. From Epiphone's 'Inspired by Gibson' Collection, some stunning new finishes with high-end electronics and incredible specs make this guitar a serious value for money proposition.

MAHOGANY AND MAPLE CLASSIC COMBO
Keeping in with the vintage aesthetic the Les Paul Modern has the archetypal guitar tonewood combination of a Mahogany body with a Maple Cap. As well as looking amazing this tonewood combination gets you the best of both types of wood, so all the warmth and sustain of Mahogany melds with the bright, snappiness of Maple to deliver something the tone-hounds will adore. This guitar features weight relief in the body, whereby chambers are drilled to help take the strain off your back. So no matter how long the show you'll be able to keep going without any weight-induced fatigue.

ASYMMETRICAL SLIM TAPER NECK
Continuing with a more modern theme this guitar has an Asymmetrical Slim Taper neck which means on the bass side of the neck the profile is thicker whereas the treble side is thinner to promote fast playing. A contoured neck heel is also present allowing you to reach the upper register with ease, great for searing lead work. The neck is composed of Mahogany to match the body, ensuring fantastic resonance throughout the entire guitar. The 24-fret fretboard is comprised of Ebony which feels lavish under your fingers, marked by Pearl Trapezoid Inlays.

PROBUCKER PICKUPS
Two ProBucker Pickups deliver crisp and articulate tones, perfect for rock and the styles around it. There's no mud here, these pickups translate your playing in a clear fashion with a nice high output. The bridge pickup excels in the midrange whilst the neck gives plenty of body, with detailed low end and a bit of percussive treble tone. There's also coil-splitting and phase switch options accessible via push/pull knobs so a plethora of tone sculpting options are available for you to feast your ears on.

HARDWEARING HARDWARE
The Les Paul Modern has a LockTone ABR bridge with a Stopbar tailpiece to ensure fantastic intonation and an easily adjustable action. Working in conjunction with the Grover Locking Rotomatic tuners with Tulip Buttons and an 18:1 ratio, you get tuning stability that won't let you down no matter how hard you strum.

The Epiphone Les Paul Modern Electric Guitar in Vintage Sparkling Burgundy not only looks and sounds the business but is available at a more than reasonable price. Want that rock and roll heritage without remortgaging your house or taking out a loan? Look no further.
PostTweetShare Share with WhatsApp Share with Messenger
Community Updates
Dawsons Music Deals
New Comment Subscribe Save for later
20 Comments
3rd Feb
Want
3rd Feb
I was surprised to read 24 frets on a les paul, counting the frets in the pics it does look like they are 22.....

EDIT:
"Ebony fretboard with 22-frets and Trapezoid Inlays"
"The 24-fret fretboard is comprised of Ebony which feels lavish under your fingers, marked by Pearl Trapezoid Inlays."
Edited by: "Chulmney_Warner" 3rd Feb
3rd Feb

Yep, that's incorrect on the listing 100%! Nice spot there
3rd Feb
Not dissing it ...but I've Always thought there were better Les Paul type guitars out there rather than dropping 500 quid on an epi

A couple that spring to mind are gretsch....and PRS

..personally I found they felt a lot nicer to play...and build quality was miles better...

Though I have to say I saw a busker in town Saturday..playing a 200 quid epi Les Paul through a little portable amp and he sounded great
Edited by: "freddyfender" 3rd Feb
3rd Feb
just missing that Gibson headstock.....
3rd Feb

Haha.. kept the Epiphone headstock low key for this advert

Not at all, there's mention of the logo change as well as an image of the headstock in the OP.
Edited by: "Ken" 3rd Feb
3rd Feb
Very tempting...
3rd Feb
Gibsons on Thomann for that price there or thereabouts.
3rd Feb 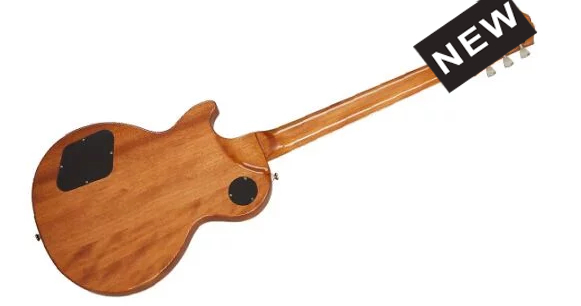 Great guitars.. and for those who don't know Gibson own Epiphone... having owned Les Paul's of both I'd sooner buy an Epiphone that's tricked out than a base level Gibbo...
3rd Feb

Haha Noooooo and you know it 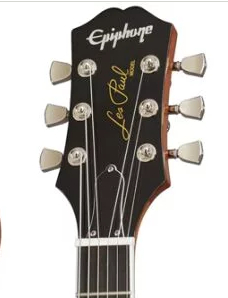 There was some speculation of the Epiphones getting the Gibson headstock, but no idea what happened with that. I mean... the latest ones are closer than some of the others. I don't think it's hideous myself and I'll likely be picking one of these up at some point in the near future.

I had a full fat Les Paul a fair few years ago and while I loved it, I was taking to my Ibanez more often than the LP. (put that down to Andy Timmons and John Petrucci) I got the Gibson fairly cheap and made a profit on it. The idea was that I grabbed and Epiphone model and kept the change. It never happened

This is the first time I've felt the "want" for a Les Paul from the Epiphone range, although I liked the Plus top. I already have a custom SG build in progress and set of Pro Buckers to go in it though. No idea what to do... usually I lose either way but end up with lovely things, haha.
Edited by: "Ken" 3rd Feb
3rd Feb

Gibsons on Thomann for that price there or thereabouts.

Golden rule : never "settle" on an expensive guitar without playing it. You've got 14 days return with Dawsons.

Trust me, many guitar dealers cherry pick the best examples - you're putting yourself at their mercy buying blind!! I'm not saying Dawsons does this, but honestly.. the quality varies so much ideally you want to be buying one from a showroom. If buying mail order be fully prepared to return it.

@NeoTrix I was much the same.. not only did I have a slight buzzin' fret on the B string of my LP, but it was so expensive and easily damaged it spent time in it's case, whilst I reached for the Ibanez (yep.. coincidence eh.. a Roadster which I played more and it wouldn't matter if it got damaged - I'll try and find a pic which is self explanatory to the latter point )... also the LP has a very identifiable and inflexible sound,, which is great if you're trying to sound like Jimmy Page but I preferred the Tele for a wider palette of sounds.. and like you I sold my LP on for a profit, I still have the Ibanez..
3rd Feb
Too long to read- Should I buy this guitar for my husband's 30th? Thanks

Can I please get some help on this thread? I want to buy my husband a quality guitar for his 30th birthday. He used to play over 10 years ago when I met him just as an amateur but with work and 3 kids later he's not played or owned a guitar since a around 2011. He decided he wants to start playing again and in fact wants to build a guitar himself from scratch, he's got the wood a number of tools, I even bought him some wood work tools for Christmas, bearing in mind he's just learning from YouTube and has no wood work expertise, being the realistic person that I am, there is simply no time to make one from scratch so I'd rather just buy him one so he can get on with learning to play. So my question is, is this a good guitar option? Am I paying for a brand name? Could I get a cheaper quality option? Thanks
3rd Feb
Yeh let me buy a Les Paul
A day later: goddamn this is one heavy mofo.
3rd Feb

Yeh let me buy a Les PaulA day later: goddamn this is one heavy mofo.

Such a hard question to answer. Guitars are so personal. You're better off first finding our if he is a Gibson/Epiphone man, or a Fender/Squire kind of guy. Some people are one or the other.

In my opinion, I think these are overpriced, being Epiphkne guitars. I do own an Epiphkne guitar that can easily compete with a Gibson, buy mine was made in the early 90s in Korea.
I actually prefer to buy guitars second hand and so do many other. Some people feel that they took more care with making them and used better materials back then. However, this is wide ranging.

Sorry not really been able to help!!
4th Feb

Agree with the comment above - you need to find out what type of guitar your husband likes and wants to play.. maybe ask him!
4th Feb

Thanks guess I'll have to ask some more questions
4th Feb
Les Paul purists should stick to Gibson anyway, Epiphone should have done these more modern models ages ago. They look good. My one gripe is that damn Epiphone headstock.
4th Feb

depends on what style he likes, some people like this style of guitar, some like Fender Stratocasters and Fender Telecasters instead. his musical tastes may help you determine this. however, to answer your question, nothing wrong with these guitars, however in your specific case, for this money I would look into Fender Stratocaster or Telecasters. they have a nice mid priced range that would satisfy a brand name guitar, with taste, sound and classic looks. good luck!