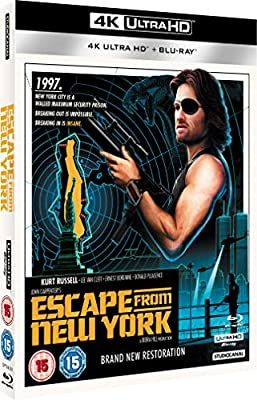 
Synopsis
It is 1997 and a nearly destroyed New York City has become a walled prison for over 3 million convicted criminals who have lost, but survived, a brutal war against the United States Police Force. In this maximum security prison-city, escape has been made impossible – every bridge is mined and walled, the surrounding waters are filled with deadly electricity and the Statue of Liberty has become just another guard tower from which officers in infra-red goggles blast, on sight, any prisoners desperate enough to try to get out. Radar scanners revolve and helicopters circle the island of Manhattan endlessly. Other than the monthly food drops made by air into Central Park these outcasts are left completely on their own to prey on each other.

Into this living hell one master criminal, Snake Plissken, is sent alone on a mission as dangerous as the criminals within its walls; he must rescue the President of the United States whose plane crashes in New York City on its way to a world summit conference; the President is carrying papers that are crucial to the survival of the United States.

John Carpenter's classic Escape from New York has been stunningly restored in 4K. The year is 1997 and in a police state future the island of Manhattan has been turned into a maximum security prison. The rules are simple: once you're in, you don't come out. But when the President of the United States (Donald Pleasance) crash lands an escape pod into the centre of the city after fleeing a hijacked plane, a ruthless prison warden (Lee Van Cleef) bribes ex-soldier and criminal Snake Plisskin into entering the hazardous Manhattan and rescuing the distraught president from the twisted world of New York and from the demented clutches of its new ruler The Duke (Isaac Hayes) in John Carpenter's cyber-punk, action, suspense spectacular.

The 2018 restoration of ESCAPE FROM NEW YORK was made from the 35mm original camera negative. A full 4K 16bit workflow was applied to create a 4K DCP, UHD version and a new HD version which were produced with the same high technological standards as today's biggest international film releases.

The restoration and new UHD version was colour graded and approved in Los Angeles by the Cinematographer, Dean Cundey.

Photo gallery incl. Behind the Scenes

Dolby Vision
Region: 2.35:1
Audio: 5.1 DTS HD Master Audio
Features & details
Product information
Run time 1 hour and 39 minutes
Number of discs 3
Format 4K, Blu-ray
Language English
Aspect Ratio 16:9 - 1.78:1
Manufacturer Studiocanal
Release date 18 Mar 2019
ASIN B07MXW3QPH
Customer Reviews 4.3 out of 5 stars 271Reviews
PostTweetShare Share with WhatsApp Share with Messenger
Community Updates
Amazon DealsAmazon discount code
If you click through or buy using any of our links, retailers may pay hotukdeals some money, but this never affects which deals get posted. Find more info in our FAQs and About Us page.
New Comment Subscribe Save for later
13 Comments
30th Dec 2019
Call me Snake
30th Dec 2019
Great film I remember going to the pictures to see it
30th Dec 2019
They also have The Fog and The Prince of Darkness in 4k for £16.89, not a bad price
30th Dec 2019

I don't think Studio Canal have the rights to some of those. Would be nice to get a complete Carpenter set though
30th Dec 2019
This excellent movie really is gonna 'pop' in 4K!!!

Heat for the release, not just the deal!!!
30th Dec 2019
The legend that is John carpenter.

Ordered! Many thanks for the heads up op

You are very welcome
1st Jan

Correct. The Thing is Universal I believe. Assault On Precinct 13 was last released by second sight and Christine is with Powerhouse.