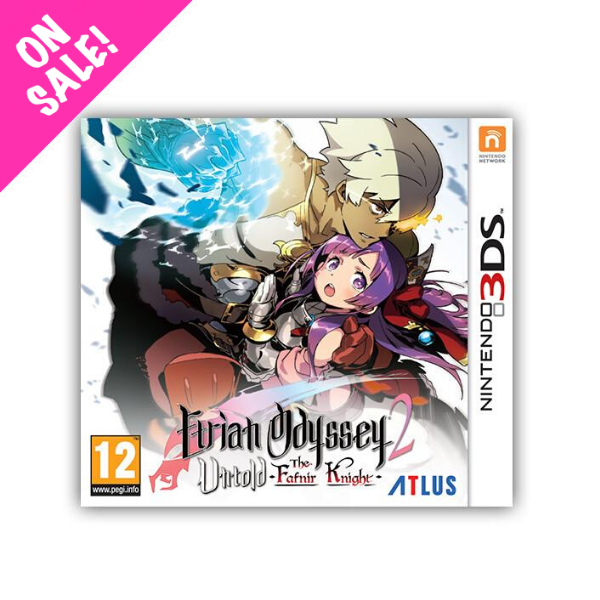 The second is the Untold portion – a brand new story mode with a fixed party, voiced dialogue, and animated cut scenes that follows the bittersweet tale of the Fafnir Knight and Princess Arianna. Like Persona Q, the Untold portion of the game has a strong focus on characters and their interactions as the story about the Fafnir Knight and Princess Arianna unfolds as they adventure forth into the ruins of Ginnungagap and the Yggdrasil Labyrinth with the hero Flavio and the two mysterious adventurers, Bertrand and Chloe.

PostTweetShare Share with WhatsApp Share with Messenger
Community Updates
NIS America (NISA Europe) Deals
New Comment Subscribe Save for later
16 Comments
27th Jan
Great game. I already have it and I looove it from start to end. Great dungeon crawler for rpg lovers. Also if you don't care about story, you have the option to play the classic Etrian and create your own team
27th Jan
Nice
27th Jan

I assume this game is rare, right?
27th Jan
Thanks picked this up with Etrian Mystery dungeon... now I just need to find the time
27th Jan
Would love to see an Etrian Odyssey on the Switch.
27th Jan

I said it because if you don't like that kind of games...this one is THE dungeon crawler. The appeal is that you don't have a map, you have to draw it yourself. I love it personally
Etrian odyssey itself is quite rare because the success was mainly in Japan/EEUU and not EU, so the pal version is not common. I suffered a bit to find etrian odyssey untold I in a logical price.
Even so, this game and the newest games are not too difficult to get it online.
Moreover DS and 3DS games are getting more difficult to get since it is getting discontinued so I think it is the best moment to get them
27th Jan

Would love to see an Etrian Odyssey on the Switch.

As far as Atlus said, it would be the next step, but no date was released
27th Jan
Was gonna post the NISA deals l. Wasn’t inspired though
27th Jan
First time ordering from here and won't be the last, needed to amend my order, emailed them, cancelled right away and ordered again.
Great service
27th Jan
Nabbed it along with Ys 8 - pricing for these is a steal considering the amount they usually go for!

If you want a copy off eBay or Amazon it will easily cost you double or triple.

Great find OP!
27th Jan
As Etrian games go, can anyone with experience tell me if this is a good entry point to the series. I've tried the ET Nexus demo a couple of times and just can't get into it. Maybe Etrian games arent for me. Closest I've played is Strange Journey Redux which I do enjoy.
27th Jan

It is since:
1- cheap
2- you can choose the story (I like it a lot) or play the classic mode where you can totally customize your party.
3- if you like rpg games and enjoy to explore dungeons, it is a great option.

And I have to advise you that it is difficult to pass. Even in the standard difficulty, you will find that you will have to do extra missions for level up. It is not a child game for sure
27th Jan
tempted but i already own the us version, should i get the uk version for my collection?
27th Jan
I played 2 of etrian games, did not manage to complete any...
27th Jan
Costing me more money
Picked up this and Rodea on wii u
Edited by: "westy90" 27th Jan
29th Jan
This is definitely my favourite of the Etrian Odyssey games on the 3DS. Probably my favourite RPG on the system. I highly recommend it.