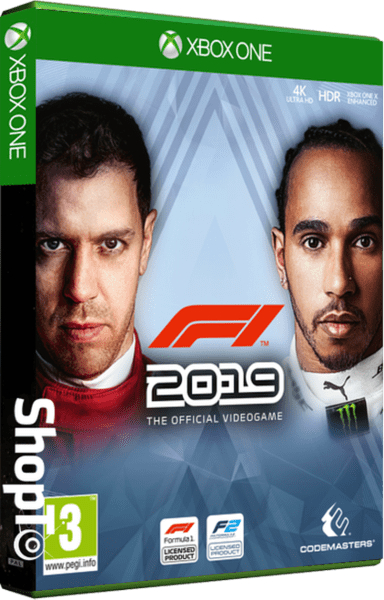 Says its the anniversary edition on the URL, but artwork suggests otherwise.

Either way this is by far the cheapest the game has ever been on Xbox, and puts it close to the £25 that's its currently available for on PSN.

Will no doubt probably hit £25 somewhere this week like Smyths Toys did last year but will be mean dealing with the crowds as they usually stop online orders Black Friday weekend.

Here's the words of the words, from the devloper:

FORMULA ONE WORLD CHAMPIONSHIP, F1 2019. This is the tenth game in the series and features stunning visuals and official F1 theme music. Race against official teams and drivers in all 21 circuits from the 2019 season.

Jump into the driver’s seat of many classic F1 cars that will be returning for F1 2019. It will also see the F2 Championship, so you can complete the 2019 FIA Formula 2 Championship before racing ahead into the Formula One Championship. The 2019 F2 Championship will be made available as a free digital update during the season.
PostTweetShare Share with WhatsApp Share with Messenger
Community Updates
ShopTo DealsShopTo discount code
If you click through or buy, retailers may pay hotukdeals some money, but this never affects which deals get posted. Find more info in our FAQs and About Us page.
New Comment Subscribe Save for later
5 Comments
24th Nov 2019
Horrible game id rather play curling
24th Nov 2019
But you're just a bot with the same comment on every gaming deal, so you can't even play curling as you have no arms and legs.
24th Nov 2019

Us the bots have feelings you know?
24th Nov 2019
Just thought I'd add if you sign up for XCloud it's available on there for free been playing it actually streams very well, not perfect but better than I expected
24th Nov 2019
Wonder how long it would take for this game to come to game pass