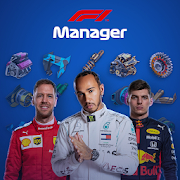 FREE£0.01Google Play Deals
13
Get deal*Get deal*
13Get deal*Get deal*
Posted 21st May
Play NEW F1® Manager for FREE and be the boss! Take control, make the big calls and master the art of race strategy to become the best F1® team in the world. Will you tell your race drivers to risk it all and go for it, or play the long game and sneak victory on the final lap? Faster than ever on-track action with STUNNING graphics. Featuring all the OFFICIAL circuits, teams and drivers from the 2019 FIA Formula One World Championship™, including Lewis Hamilton, Sebastian Vettel, Max Verstappen and Daniel Ricciardo.

GAME FEATURES
● Official Formula 1® racing management strategy game
● Create your ultimate F1® team and duel players in real-time 1v1 races
● Make split-second decisions to defeat your racing rivals
● Win chequered flags to unlock new series and earn epic rewards
● Recruit and train real-life F1® drivers
● Collect car components, develop and customise your race cars
● Compete against all 10 official F1® teams at beautiful real-life F1® circuits
● Pull off genius tactical management orders
● Set your pit stop strategy and select the right tyre compounds
● Decide when to push hard or conserve fuel
● React to weather changes, accidents and safety car periods
● Battle your way to the top of your league and win promotion to better divisions
● Compete every F1® race day for the ultimate rewards in Grand Prix™ Events
PostTweetShare Share with WhatsApp Share with Messenger
Community Updates
Google Play DealsGoogle Play voucher
New Comment Subscribe Save for later
Top comments
21st May
Is this not just a free game with in app purchases?
13 Comments
21st May
That's a great saving. Shame it's not on IOS
21st May
Is this not just a free game with in app purchases?
21st May
The app is (and was) free (but it has in-game purchases)
21st May
Really bad reviews
21st May
This has always been free
21st May
Is this better than the motorsport manager games?
21st May
Codemasters and free? That can't be anything good. Probably paywall after paywall. They are EA of racing games.
21st May
Personally prefer Motorsport Manager Online.
21st May
Cold. Always been free
21st May
Afraid I'm with the others on this. The game is normally free and is designed to irritate you just enough that you'll make in-game purchases.
21st May
The game is very glossy but rubbish and riddled with game breaking bugs. Shouldn't that be Codemasters catchphrase?! Far too buggy, you have to use coins to enter races and I lost all my coins as the game regularly fails to matchmake you with someone. I'd avoid and play Motorsport manager, definitely.
21st May
Part of a recent review from Google play, which to me sounds like an accurate description of real F1

The new update has made this game hard to sit through and play. There are no more exciting strategies. You just have to qualify higher and then hope you don't get stuffed in the first corner and you've won
21st May

Maybe if people weren't conditioned into thinking things should be free, they wouldn't offer in-app purchases. But you seem to pick fault with Codemasters yet ignore Rockstar?