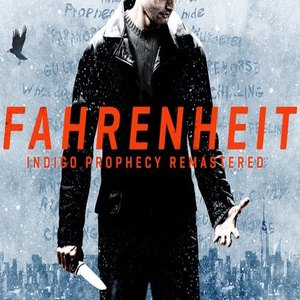 Description
Originally released in 2005, Fahrenheit (known as Indigo Prophecy in North America) was a breakthrough in interactive narrative, teetering between the worlds of cinema and gaming while also embracing them, carving its own unique genre in the entertainment landscape. This newly remastered edition features updated graphics, full controller support AND is based on the uncut/uncensored international version of the game.

With a rich multilayered narrative, innovative presentation, and a chilling musical score by famed Hollywood composer Angelo Badalementi, Fahrenheit: Indigo Prophecy Remastered serves as the definitive version of the supernatural murder mystery and (re)introduces the groundbreaking title to old and new fans alike.

Hope it helps someone.
PostTweetShare Share with WhatsApp Share with Messenger
Community Updates
Greenman Gaming DealsGreenman Gaming voucher
If you click through or buy, retailers may pay hotukdeals some money, but this never affects which deals get posted. Find more info in our FAQs and About Us page.
New Comment Subscribe Save for later
Top comments
13th Jan
This is a really good game. For those that don't know this is the brain child of Quantic Dream/David Cage who also created Heavy Rain, Beyond Two Souls and Detroit: Beyond Human. Fantastic, original and unique gameplay experiences.

Probably pretty dated now, but for 40p ....
13th Jan
Need to see if I already own this before buying.. lol
21 Comments
13th Jan
Good game I thought the controls are dated but useable
13th Jan
This is a really good game. For those that don't know this is the brain child of Quantic Dream/David Cage who also created Heavy Rain, Beyond Two Souls and Detroit: Beyond Human. Fantastic, original and unique gameplay experiences.

Good game I thought the controls are dated but useable

They felt awkward back in 2006 when I first played it. I did like the opening scenes at the diner and the cinematic presentation. Now stuff like this just doesn't impress me.
13th Jan

The game really started strong and went downhill from there . It finished somewhere in the middle. So in the end it's a pretty decent experience.
13th Jan
Loved this game
13th Jan
Need to see if I already own this before buying.. lol
14th Jan
I really enjoyed this on the Xbox back in the day, it's well worth 40p to play on the Steamlink

Oh, has anyone played it successfully in Winblows 10?
Edited by: "Rhythmeister" 14th Jan
14th Jan

I've played it on win 10 machine no issues but it was using steam
14th Jan
youtube.com/wat…pWE
Awful mess of a game. Excellent soundtrack though.
14th Jan
I really enjoyed this game, definitely worth trying at this price
14th Jan

Its definitely not and is an absolute cult classic. It was an amazing experience at the time and probably still is.
14th Jan

Agreed on all points fantastic game and other than The ps1 metal gear solid, probably the demo i played the most as a kid. Bargain
15th Jan
Great game. I played the "XBOX Original" on Xbox 360 from download.
It's pretty ugly, but it plays well and if you're a fan of the later Quantic Dream games, at £0.40 you could do worse!
Play time (from what I recall) is more than 5 hours.
If you're even remotely interested - go for it!
Edited by: "b3nwhy" 15th Jan
15th Jan

Between the "Simon says" button mashing and the mental breakdown of a plot a third of the way in...eugh.
Like a Netflix movie, someone had an idea -- and that's as far as it goes with the story and its structure.
15th Jan
Heat added, great price for a unusual but very good game
15th Jan

Good game I thought the controls are dated but useable

They were clunky at the time. Just think of it as part of the charm.
15th Jan
Fun fact - This game I believe was the first game to feature a full nude scene.

It's also a really good game despite that fact.
15th Jan

That could describe a lot of David Cage games honestly

The grand vision is there and they usually start strong but the plots tend to get lost. Fahrenheit starts great but at the end it's just absolutely mental.

I remember a jump scare from early-ish in the game that made my pal fall off the sofa. That was fun
15th Jan
Bought then found out I already owned it in Steam so I gave it away to a coworker
15th Jan