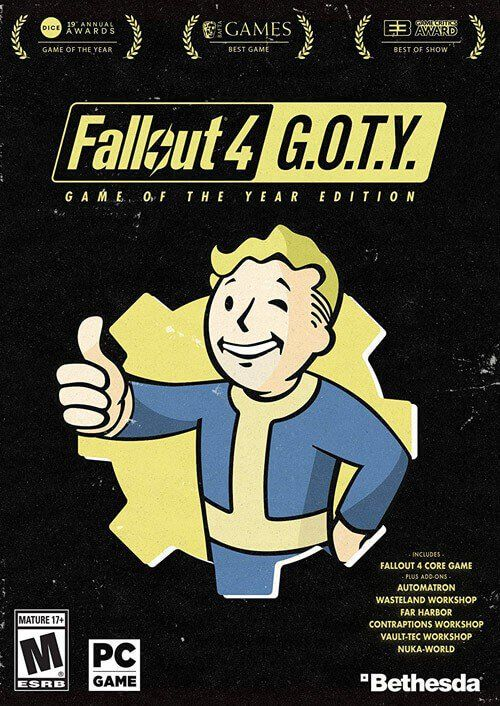 Return to the Wasteland with Fallout 4: Game of the Year Edition. With all the latest gameplay updates, graphical enhancements, the ability to play Mods for free on PC and consoles, plus all official add-ons included, this is the ultimate way to experience the award-winning post-nuclear adventure from Bethesda Game Studios.

Winner of more than 200 “BestOf” awards –including the 2016 BAFTA and 2016 D.I.C.E. Game of the Year – Fallout 4 is the studio’s most ambitious game yet. As the sole survivor of Vault 111, you enter a world destroyed by nuclear war. Every second is a fight for survival, and every choice is yours. Only you can rebuild and determine the fate of the Wasteland.

Freedom and Liberty
Do whatever you want in a massive open world with hundreds of locations, characters, and quests. Join multiple factions vying for power or go it alone, the choices are all yours.You're Special
Be whoever you want with the S.P.E.C.I.A.L. character system. From a Power Armored soldier to the charismatic smooth talker, you can choose from hundreds of Perks and develop your own playstyle.Super Deluxe Pixels
An all-new next generation graphics and lighting engine brings to life the world of Fallout like never before. From the blasted forests of the Commonwealth to the ruins of Boston, every location is packed with dynamic detail.Violence and V.A.T.S.!
Intense first or third person combat can also be slowed down with the new dynamic Vault-Tec Assisted Targeting System (V.A.T.S) that lets you choose your attacks and enjoy cinematic carnage.Automatron!
The mysterious Mechanist has unleashed a horde of evil robots into the Commonwealth, including the devious Robobrain. Hunt them down and harvest their parts to build and mod your own custom robot companions. Choose from hundreds of mods; mixing limbs, armor, abilities, and weapons like the all-new lightning chain gun. Even customize their paint schemes and choose their voices!Wasteland Workshop!
With the Wasteland Workshop, design and set cages to capture live creatures–from raiders to Deathclaws! Tame them or have them face off in battle, even against your fellow settlers.The Wasteland Workshop also includes a suite of new design options for your settlements like nixie tube lighting, letter kits, taxidermy and more!Far Harbor
A new case from Valentine’s Detective Agency leads you on a search for a young woman and a secret colony of synths. Travel off the coast of Maine to the mysterious island of Far Harbor, where higher levels of radiation have created a more feral world. Navigate through the growing conflict between the synths, the Children of Atom, and the local townspeople. Will you work towards bringing peace to Far Harbor, and at what cost? Far Harbor features the largest landmass for an add-on that we’ve ever created, filled with new faction quests, settlements, lethal creatures and dungeons. Become morepowerful with new, higher-level armor and weapons. The choices are all yours.Contraptions Workshop!
Machines that sort! Machines that build! Machines that combine! With Fallout 4 Contraptions, use conveyer belts, scaffolding kits, track kits, even logicgates to construct crazy and complex gadgets to improve your Wasteland settlements. The Contraptions Workshop also includes all-new features like elevators, greenhouse kits, warehouse kits, fireworks, armor racks and more!Vault-Tec Workshop!
Build a brighter future underground with the all-new Vault-Tec Workshop. Create a massive Vault and attract new Dwellers using pre-war industrial kits complete with retro-nostalgic furniture, lighting, and art. And like every good Overseer, run Vault-Tec approved experiments on your Dwellers to learn what makes an ideal citizen. Vault-Tec has given you the tools, the rest is up to you!Nuka-World!
Take a trip to Nuka-World, a vast amusement park now a lawless city of Raiders. Explore an all-new region with an open wasteland and park zones like Safari Adventure, Dry Rock Gulch, Kiddie Kingdom, and the Galactic Zone. Lead lethal gangs of Raiders and use them to conquer settlements, bending the Commonwealth to your will. Nuka-World features new quests, Raiders, weapons, creatures, and more. Enjoy the ride!

This comes with the season pass
2nd Sep 2018

This comes with the season pass

I know, just pointing out it's also available separately for those who already have the base game Like me. I'm wavering over whether to get it... Suspect it might get cheaper, and I'm still finding stuff in the base game despite completing it once already!
2nd Sep 2018

I'm hoping it'll be £15 direct through steam for Christmas...then I'll bite
2nd Sep 2018
Real problems with the Steam client right now...a common problem that Steam does not seem to address...
Steam doesn't open and instead I get this in a dialogue box...
..."Fatal Error...Steams Needs to be online to update...Please confirm your network connection and try again"
Before you make any suggestions, I have tried all 30 or 40 'fixes' without success as it seems a lot of other people have too. I'm left with games that I have paid for that cannot be played.
3rd Sep 2018

My facebook code(which i've used only once) wouldn't work.

Steam client is required, is it not?
Well, as I said I tried all that...
Thanks anyway Bud.
Edited by: "scottswaha" 3rd Sep 2018
3rd Sep 2018
How does one avail of the FB code? Do you just log into your cdkeys account and click the website's fb like button and it should be emailed or what? Thanks in advance.

EDIT: For those wondering, go to cdkeys.com/fb and enter your email, the code will generate and be displayed in an image (disgusting). I only got 80p off with mine for whatever reason.
Edited by: "achyyyy" 3rd Sep 2018