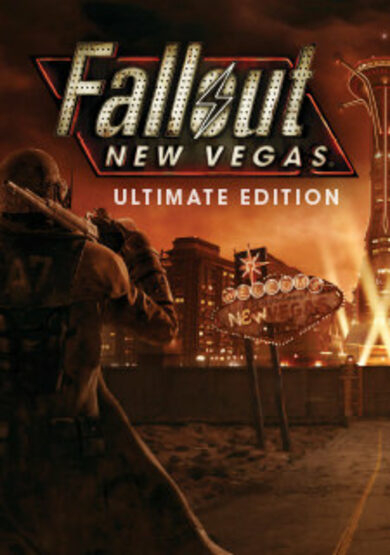 Fallout: New Vegas was Obsidian (The Outer Worlds, Pillars of Eternity) take on the recent Bethesda’s Fallout formula and it’s still seen by many as the best modern Fallout game out. It’s orange-ish tinted Las Vegas wasteland with plenty of colorful and interesting characters and dialog, as well as a lot of freedom certainly make it at the very least, an very interesting FPS / TPS post-apocalyptic open-world RPG.

Once you start the game, you will make your character and set the skill points per usual, and after that it’s up to you. Your character, known as “The Courier”, was left for dead and buried alive, and that’s your first step as to what to do in the massive wasteland: look for who shot you and wanted you dead. As you start digging up, you will be introduced to a number of different factions and side-quests, and as you work for or against those factions, the world around you will start shaping around your decisions.

The Ultimate Edition includes all four DLCs released for New Vegas. This means that Old World Blues and Dead Money, some of the best extra content for the Fallout series will be available to you and they are definitely worth a play. Both of them averages 6 hours of new story content each.

Make sure you check New Vegas’ PC Gaming Wiki page in order to get many fixes and workarounds for the best experience possible.
PostTweetShare Share with WhatsApp Share with Messenger
Community Updates
Eneba Deals
New Comment Subscribe Save for later
2 Comments
24th Feb
If only they made this masterpiece for the Switch...
25th Feb

If only they made this masterpiece for the Switch...