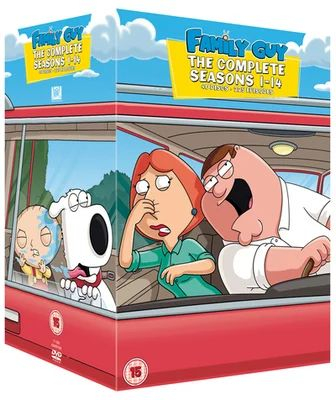 really hope it helps someone!

The complete seasons 1-14 of the animated comedy series. The Griffins are an average North American family living in an average North American home in an average North American town. The dad Peter (voice of Seth MacFarlane) is a big TV fan; mom Lois (Alex Borstein) is a former heiress who gave up her riches to marry the man she loves; 16-year-old Meg (Mila Kunis) is a drama queen eager to be accepted by her peers; 13-year-old Chris (Seth Green) likes his food and has the beginnings of a TV habit which could grow to equal his dad's; baby Stewie (MacFarlane) is a malevolent genius with plans for complete global domination; and martini-guzzling Brian (MacFarlane) is the wise-cracking family dog.
PostTweetShare Share with WhatsApp Share with Messenger
Community Updates
Base.com DealsBase.com discount code
New Comment SubscribeSave for later
12 Comments
21st Apr
Funniest cartoon of all time!
21st Apr

Funniest cartoon of all time!

I keep my eye out for it now and again but I‘m waiting for a ludicrous price on all seasons, which will probably never happen. I used to own most of them as well but I got rid
21st Apr
Shut up Meg.
21st Apr
Never gonnna catch meeeeee. Forget about it. You’re wasting yo tiiiiiiiiime

I was tempeted to buy them when they went down in price but then I realised I stream all my content and dont own a dvd player ‌
Edited by: "Jordan_Williamshs7" 21st Apr
21st Apr

That’s the disadvantage. I have a DVD player, but I prefer digital so I can watch on iPad, or on my TV. I’ve got enough to watch anyway so I’ll leave it as a golden memory from my childhood and enjoy the odd clip that pops up instead.
21st Apr
Is there any streaming service that streams full seasons? Only find the odd episode on now tv and itv hub.
21st Apr
Family Guy, a great watch if there's nothing else on.
Chicken Fights, Kool Aid's Oh Yeah!, Cool Hwip, but I've gotta say, one of the most on point episodes I've seen is when Peter becomes a Millenial in HTTPete.
Edited by: "TopTrump" 21st Apr
21st Apr