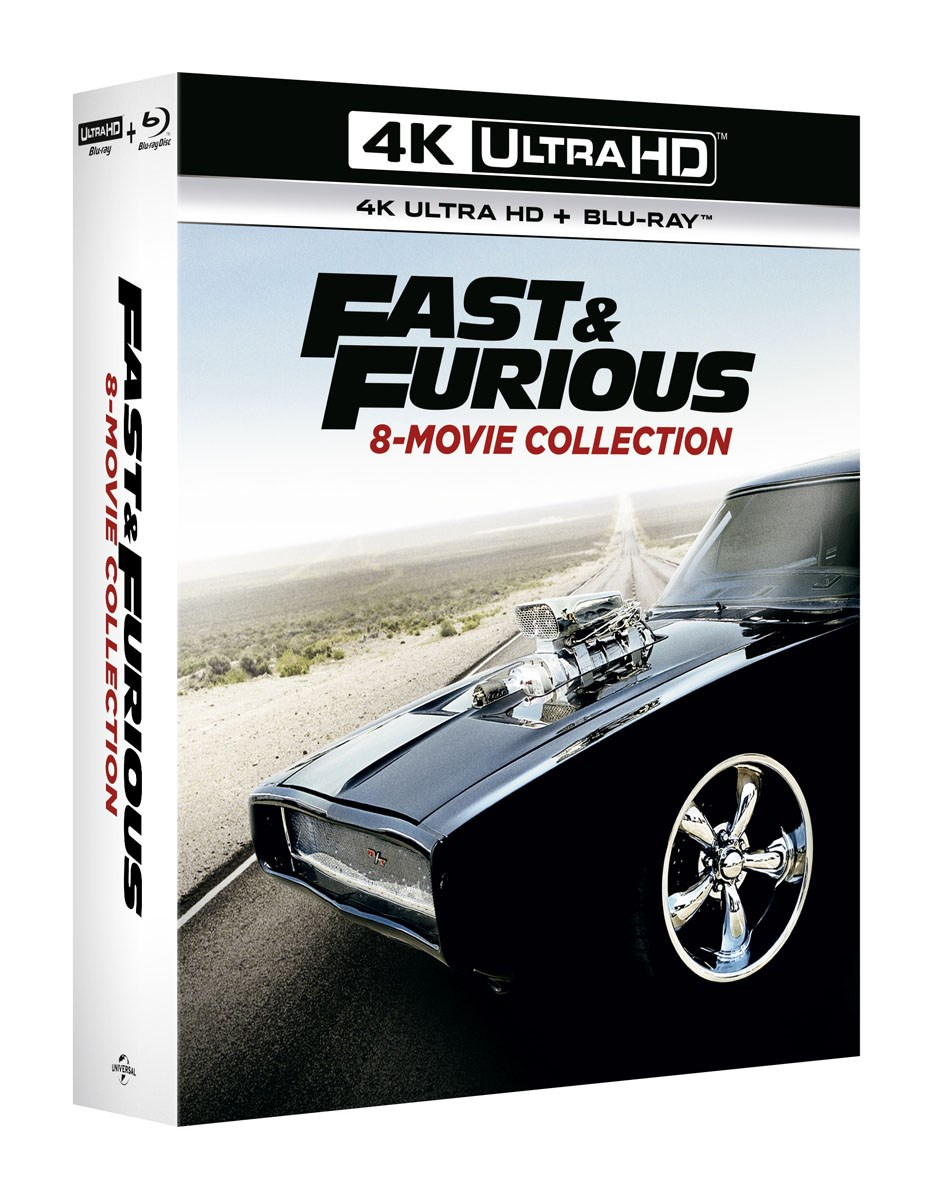 Buckle up for nonstop action and mind-blowing speed in the high-octane Fast & Furious 8-Movie Collection. Vin Diesel, Paul Walker, Dwayne Johnson, Michelle Rodriguez and an all-star cast put pedal to the metal in pursuit of justice and survival as they race from L.A. to Tokyo, Rio to London, and Cuba to New York City. Packed with full-throttle action and jaw-dropping stunts, these eight turbo-charged thrill rides place you behind the wheel of the most explosive film franchise in history!

In ‘The Fast and the Furious’ (2001) undercover cop Brian O’Conner (Paul Walker) is assigned to the Los Angeles illegal street racing scene to search for the criminals behind a string of hijackings. His prime suspect is Dominic Toretto (Vin Diesel), whose passion for Japanese fast cars is matched only by his enthusiasm for stealing hi-tech equipment.

In ‘2 Fast 2 Furious’ (2003) O’Conner finds himself on the trail of another group of underground car enthusiasts. This time the location is Miami, where O’Conner has been making money out of street racing and is tasked with bringing down the drugs baron Carter Verone (Cole Hauser) in exchange for wiping clean his criminal record.

In ‘The Fast and the Furious: Tokyo Drift’ (2006) street racing loner Sean Boswell (Lucas Black) avoids jail time by absconding to Tokyo to live with his uncle in a cramped apartment. In the land that gave birth to the majority of modified racers on the road, the simple street race has been replaced by drift racing, an even more deadly combination of brutal speed on heart-stopping courses. Boswell inevitably gets drawn into the racing and the complexities of the underworld which surround it.

In ‘Fast & Furious’ (2009) fugitive ex-con Dominic Toretto reignites his feud with agent O’Conner on the streets of Los Angeles, but as the two men find themselves facing a common enemy in the form of a heroin importer, their attempts to infiltrate his operation result in an unlikely alliance.

In ‘Fast & Furious 5’ (2011) Toretto and his sister Mia (Jordana Brewster) are forced to enlist O’Conner’s help once again as they find themselves cornered by a ruthless drugs gang in Rio de Janeiro. But the Rio gangsters are not the only ones on Toretto’s tail; wily federal agent Luke Hobbs (Dwayne Johnson) has also been assigned to track down the pair, and will stop at nothing to corner his prey.

In ‘Fast & Furious 6’ (2013) Toretto and the rest of his compatriots are forced to kill time lying low in different locations around the world following their lucrative Rio heist. When agent Hobbs offers Toretto and his crew full pardons in return for taking down Owen Shaw (Luke Evans)’s gang of mercenary drivers, the offer seems too good to pass. But as the rivals head for a showdown on the streets of London, Toretto learns that Shaw’s second in command is none other than his presumed dead former lover, Letty (Michelle Rodriguez).

In ‘Fast & Furious 7’ (2015) the group are now being targeted by Shaw’s ex-special forces brother Deckard (Jason Statham). Left with no choice but to defend themselves, it isn’t long before Toretto, Hobbs, O’Conner and the rest of the gang become embroiled in a feud between international terrorists and the US government.

Finally, in ‘Fast & Furious 8’ (2017) the team are left shocked when their leader Toretto betrays them after being seduced into a world of crime by international cyberterrorist Cipher (Charlize Theron). Teaming up with DSS agent Hobbs and former nemesis Deckard Shaw, Pearce (Tyrese Gibson), Tej (Ludacris) and the rest of the gang must set out on a dangerous mission to take down their new enemy and bring Toretto home.
PostTweetShare Share with WhatsApp Share with Messenger
Community Updates
Zoom DealsZoom voucher codes
New Comment SubscribeSave for later
2 Comments
29th May
Maybe as cheap as this particular set will likely get for a while but still very expensive for a coaster set.
Edited by: "Richthegamer" 29th May
7th Jun
@cbr6fx - Price is now £45 if you want to update and ask Mods to bump