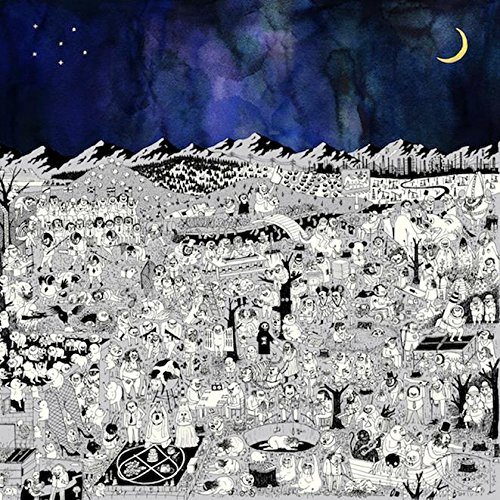 Father John Misty's Pure Comedy is the highly anticipated follow-up to his internationally acclaimed album, I Love You, Honeybear. Pure Comedy highlights include the title track alongside standouts "Leaving LA," "Total Entertainment Forever," "Ballad of the Dying Man," "When The God Of Love Returns There'll Be Hell To Pay" and "Things It Would Have Been Helpful to Know Before The Revolution." Since 2012, Father John Misty, aka Josh Tillman, has unexpectedly emerged as a singular (if not undeniably, um, idiosyncratic) voice. Whether by virtue of his lyrics, which routinely defy the presumed polarities of wit and empathy; his live performances which may perhaps be described best as "intimately berzerk", or the infuriating line he seems to occupy between canny and total fraud online or in interviews, Father John Misty has cultivated a rare space for himself in the musical landscape - that of a real enigma. Pure Comedy sees Tillman at the height of these powers: as a lyricist, and equally so a cultural observer - at times bordering on freakishly prescient. Tillman's bent critiques, bared humanity and gently warped classic songwriting are all here in equal measure and - at 75 minutes - there's a veritable fuck ton of it. The album navigates themes of progress, technology, fame, the environment, politics, aging, social media, human nature, human connection and his own role in it all with his usual candour, and in terms as timely as they are timeless. Tillman wrote the majority of Pure Comedy throughout 2015 and recorded all the basic tracking and vocals live to tape (in no more than two takes each) at United Studios (fka the legendary Ocean Way Studios, favored by Frank Sinatra and The Beach Boys) in Los Angeles March 2016. Pure Comedy was co-produced once again by Josh Tillman and long-time producer Jonathan Wilson; mixed by Tillman, Wilson and Trevor Spencer, and mastered by Bob Ludwig at Gateway Mastering Studios. The album features string, horn and choral arrangements from classical iconoclast Gavin Bryars (Jesus Blood Never Failed Me Yet, Sinking Of The Titanic), with additional contributions from Nico Muhly and Thomas Bartlett.
PostTweetShare Share with WhatsApp Share with Messenger
Community Updates
Amazon DealsAmazon discount code
New Comment Subscribe Save for later
14 Comments
15th Feb
Brilliant album. The man is a genius. Heat from me.
15th Feb
I will never understand why people like this. But Radio 6 fall over themselves to praise him and I can't stand 99% of the stuff they plug,
15th Feb
Hipster fluff. His two albums before this were much better.
15th Feb

What's the point of listening to a radio station where you only like 1% of the music they play...?
15th Feb
Thanks OP!
15th Feb

Don't get a choice unfortunately bud, it's the workplace stereo.
15th Feb

Don't get a choice unfortunately bud, it's the workplace stereo.

Wow, that's rough, there should be a law against that. I’d forgotten there was a radio 6, just been on the website. What a bunch of insufferable wazzocks! I thought all that hipster crud was behind us now. I’d rather have silence, and listen to my tinnitus!
15th Feb

Don't get a choice unfortunately bud, it's the workplace stereo.

Seriously though, it sounds like you have really poor taste in music so get some ear defenders!
15th Feb

It's just unsufferable. In part it's middle of the road stuff somewhat inoffensive but they praise it so highly and play it over and over and over so you just grow to utterly hate it.

I mean I've been DJ'ing for about 14 years now and have a really eclectic taste it goes all over the place. But this stuff is just teeth grinding awful
15th Feb

Now there's a thought ‌
16th Feb
Check out his interview with Mark and Stuart from 6music... Its pure comedy... You can find it on YouTube
16th Feb

This one? Wow they were really going for him. He sounds wasted and for the 3 minutes I could manage, he rolls with it pretty well.

I used to like "Mark & Lard" but every time I've come across Radcliffe since then he is a pretentious tw*t who needs a swift kick in the nads.
16th Feb

Yes that's it... Pure cringe but highly enjoyable lol.
I quite like them but each to their own I guess.
16th Feb

💯 agreed. Turn off whenever I hear their smug voices.