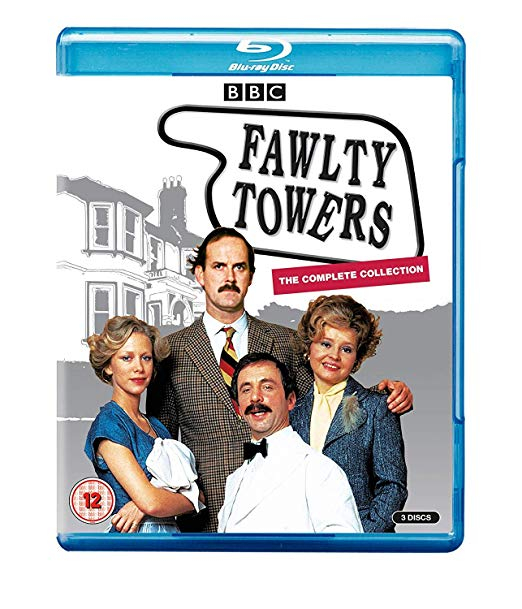 Basil Fawlty is a much put-upon, hard-working hotel manager whose life is plagued by dead guests, hotel inspectors and riff-raff. Of course his biggest headache is his ‘little nest of vipers’ - his nagging wife Sibyl. Together they run their hotel, Fawlty Towers, with a little help from the unflappable Polly, and Manuel, the trainee waiter from Barcelona with marginally more intelligence than a monkey.

Every episode of the BAFTA-winning sitcom in high definition for the first time ever.

He's not the Messiah! He's a very naught boy
22nd Jan
What's the transfer like?

Not good, surely like the rest of the old stuff they churn onto Blu

Blu ray, nice. Wonder what the quality is like

Just checked the Amazon Reviews, about what you'd expect
22nd Jan
I wonder if they have censored it - I know they were talking about it a few years ago.
22nd Jan
If they have I’ll send it back to Amazon Everyone don’t like...
Edited by: "H0TDEALER" 22nd Jan
22nd Jan

lol Luckily Andrew Sachs had a sense of humour (and had made a fortune out of it).

Every episode should have resulted in an hotel shutdown for sure for various reasons rats, poison, gun crime, peeping tom... You name it. .
22nd Jan
wouldn’t bother with this - esp at this ridiculous price. They have done little for this transfer and also applied some DNR. I would go for the remastered DVDs - has the brilliant Cleese commentaries as well.

Every episode of the BAFTA-winning sitcom in high definition for the first time ever.

That is a used product & it is my experience that world of books & music magpie only check the covers to rate the condition either good, bad & ugly.

I get your sentiment though.
22nd Jan

YOU LOVE IT!
22nd Jan
I just bought 10 of these
22nd Jan
Yes I wouldn't bother with this either, apparently very little improvement over the DVDs.
22nd Jan

These are upscaled - the show was filmed on videotape, so impossible to be in HD.... only outside scenes would use film and with his release they chose not to go back to the original elements, so all upscaled from standard definition.
Edited by: "orac1978" 22nd Jan
22nd Jan

Are you ok? and liking your own comments?
22nd Jan

It's not HD. It's mostly taken from SD video which can never be HD.
22nd Jan

It's not HD. It's mostly taken from SD video which can never be HD.

I would have thought it would have been filmed in 38mm the same as most films & series at the time. There was no SD or even HD Video. Just film which is a true reflection as it is.

IE they did not copy this from a replayed VHS ex-blockbuster rental.

BUT to say that 38mm cannot be better than HD is incorrect. It is just a conversion to digital from film & if the digital conversion is done correctly with quality the 38mm film would be better than filming in digital HD OR 4K for that matter. You are confusing yourself.
Edited by: "Willy_Wonka" 22nd Jan
22nd Jan

Most British TV shows in the 1970s - especially sitcoms - were recorded on video as it was cheaper. Every single scene of Fawlty Towers set indoors was film on SD video in a multi camera studio setting.

Anyone claiming that this was recorded on film is simply wrong. Only the small number of outdoor scenes were but that's it
22nd Jan

OK. I apologise. You are correct.
22nd Jan
Outdoor scenes were shot on 16mm film and having seen comparison screenshots these scenes do look more detailed, so they must have found some of the original film to scan.

These scenes are very brief though, so really not worth it when 95% is SD video sourced.
22nd Jan
These are by no means HD quality but personally having done some comparisons i think these are a modest improvement over the DVD versions, it is noticeable in side to side comparisons but its not night and day. Whether that's worth it for you is another matter. I might pick it up when its nearer £10 some day but I think this is a bit much. I wont vote it cold though.

When you're trying to watch a 70's sitcom on a modern 55inch plus 4k TV a small improvement might make all the difference for some people as it really does show up the flaws vs the size of screen around when it was aired originally. But the jokes work just as well either way.
22nd Jan

OK. I apologise. You are correct.

No worries, thanks for being decent enough to apologise
22nd Jan

Are you ok? and liking your own comments?

I’ve always liked my own comments. Check out my others
22nd Jan

OK. I apologise. You are correct.

No worries, thanks for being decent enough to apologise

CHEEKS!
22nd Jan
Basil on Blu-ray - finally
22nd Jan
Also would like to see the documentary about Squawking Bird the leader of the Blackfoot Indians in the late 1860s on blu ray ...heard it was a televisual feast
22nd Jan

It was Terry Jones, not John Cleese who died...
22nd Jan

It was Terry Jones, not John Cleese who died...

Ye, that was the joke ‌ ‌ the hint was getting his name wrong
23rd Jan
Yeah as others have said only the outside scenes would be on film and therefore be remastered in HD and could even be 4K. Everything indoors is SD for life.

I love this series but id get next to nowt for the DVD set which was remastered itself. Unless this was SA fiver I can't justify upgrading.