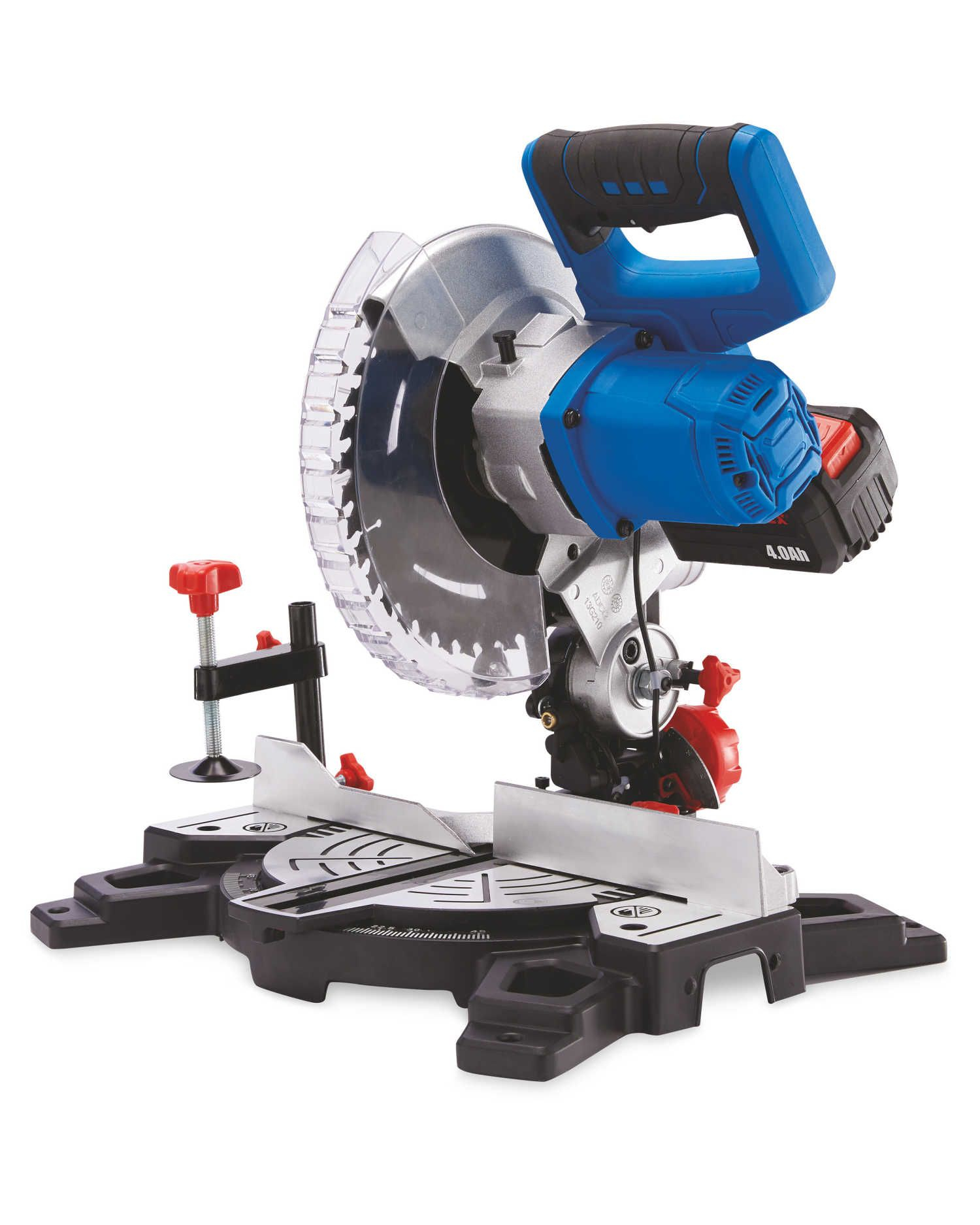 A must-have for the DIY enthusiast, this 18V Cordless Mitre Saw features a lightweight design for easy portability. It comes equipped with its own laser, making those tricky home improvement tasks a breeze.

Just about to comment something similar, of all the tools that need convenience of no leads this has to be way down the list. Not hating just not really seeing much of a need! Haven’t voted either way.
18 Comments
14th Jun
Becareful. It's ferrex but not ferrex Active battery compatible.
14th Jun

Becareful. It's ferrex but not ferrex Active battery compatible.

Is this the older style battery they are phasing out?
14th Jun
Don't really understand why power tools; that aren't designed to be handheld; need to be battery powered.
14th Jun

Just about to comment something similar, of all the tools that need convenience of no leads this has to be way down the list. Not hating just not really seeing much of a need! Haven’t voted either way.
14th Jun

If you don't have power running to, for instance, the shed in which you work, then it may make sense to get something cordless to work with if you're an infrequent DIYer. Though I'm not sure the price difference is worth it over the inconvenience of several extensions or what have you.
Edited by: "GreenVertigoFox" 14th Jun
14th Jun
Brought this yesterday as everywhere else seems out of stock. If the power is adequate, then takes the hassle out of running cables. Slightly nervous about how long the battery lasts but will give it a test this week.
14th Jun

Or even a generator, would make better sense.
Edited by: "DodgeySolenoid" 14th Jun
15th Jun

Becareful. It's ferrex but not ferrex Active battery compatible.

I'd be more worried about which courier thay use to deliver it!

You better check the reviews of this cowboy outfit on Trustpilot (XDP) before you make a decision that may cause you a lot of stress!

A lot of very bad experiences, especially if an item arrives damaged and you need to return.

You cannot take to local store and can wait weeks/months for collection and refunds.

Seems like they are the new worst courier in the UK.
15th Jun
Hey @w1l thanks for posting your first deal! Nice find
15th Jun

Bought two large items from Aldi who used XPD, both items never turned up, one retuned damaged before getting too us and one XPD said they didn't have it and Aldi said they did! They are a terrible delivery company.
Edited by: "redace" 15th Jun
15th Jun

Well, my item (Ferrex Planer/Thicknesser) eventually turned up today, but only after I spent and hour trying to find a non-premium contact number for them.

I did find 01274 657530, which I assume is for the head office, as the girl had my records, but not delivery info. But she did give me the direct number of my local delivery depot, which is 50 miles away.

I made it quite clear when I got through to the local depot that I wanted my item today and that I'd even comer and collect it and the guy said he phone the driver and low and behold it was here by mid afternoon.

I doubt my words had anything to do with it and it would have turned up anyway, but these cheapskate companies have a habit of updating the tracking, stating "carded" (attempted delivery) even though they were never even near.

My guess is it's near the end of their shift/tacho and with myself being quite far out from the depot, get left until another time.

It's happened before and I dare say it will happen again, but at least my item arrived.

Yep totally agree, I had a delayed delivery by XDP of a patio table from Aldi and it took 3 weeks to arrive, It's still showing on the tracking as being in it's second delivery depot.
My first and hopefully last delivery from these muppets.
29th Jun

One less trip hazard for a clumsy person to fall over, myself included.
29th Jun

One less trip hazard for a clumsy person to fall over, myself included.

Perhaps you shouldn't be using power tools in the first place if you're that clumsy.
29th Jun

You are probably right, unfortunately I have bills to pay.
29th Jun

You are probably right, unfortunately I have bills to pay.

Take a little bit more time and extra care then mate. Try not to rush, as I don't what you getting tangled up with these power tools. Stay safe
29th Jun