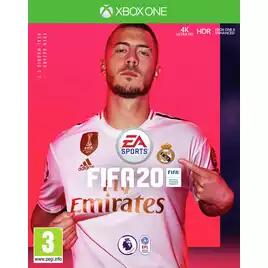 Powered by Frostbite, EA Sports FIFA 20 brings two sides of The World's Game to life - the prestige of the professional stage and an all-new authentic street football experience in EA Sports Volta.

Experience Football Intelligence, a complete rethink that unlocks an unprecedented platform of football realism. Football Intelligence elevates every living moment on the pitch: on-the-ball, off-the-ball, and through-the-ball. Built on three core pillars: Decisive Moments (on-the-ball), Authentic Game Flow (off-the-ball), and Ball Physics (through-the-ball), this approach is intended to put the user at the centre of every match.

Awareness of time, space, and position are fundamental intelligences of world class footballers. With Authentic Game Flow every AI controlled player will operate in a manner that considers these components, delivering an environment that creates more time and space, putting greater emphasis on user-controlled play.

Football is made up of a series of pivotal moments that determine the outcome of a match. From Composed Finishing in the final third to Controlled Tackling in the back, matches will be won or lost through user controlled Decisive Moments. The final dynamic component to a football match is the ball. The Ball Physics System elevates gameplay to a new level of realism, offering new shot trajectories, more realistic tackle interactions, and physics driven behaviour.