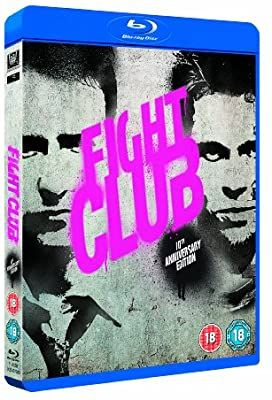 £4.99£7.9938%Amazon Deals
4
Get dealGet deal
4Get dealGet deal
Posted 29th Dec 2019
Experience the brilliance of Fight Club like never before on Blu-ray that boasts the film’s best-ever picture quality and outstanding HD audio. Revealing Special Features will give you unparalleled access behind the scenes, making this definitive edition of the film the ultimate home entertainment experience.

Brad Pitt and Edward Norton deliver knockout performances in this stunningly original, darkly comic film from David Fincher, the director of Seven. Norton stars as Jack, a chronic insomniac desperate to escape his excruciatingly boring life. That's when he meets Tyler Durden (Pitt), a charismatic soap salesman with a twisted philosophy. Tyler believes self-improvement is for the weak - it's self destruction that really makes life worth living. Before long, Jack and Tyler are beating each other to a pulp in a bar parking lot, a cathartic slugfest that delivers the ultimate high. To introduce other men to the simple joys of physical violence, Jack and Tyler form a secret Fight Club that becomes wildly successful. But there's a shocking surprise waiting for Jack that will change everything...
Features: • New HD Master Supervised step-by-step by director David Fincher
Exclusive to Blu-ray:
• A Hit in the Ear: Ren Klyce and the Sound Design of Fight Club--an interactive experience introduced by the sound designer Ren Klyce, in which the user can mix the sounds of selected scenes of the movie.
• Insomnia Mode: I am Jack’s search Index--a new navigation mode, that allows the user to tag any topics during the movie and access to all content available in the disc that refers to the tagged topic.
• Flogging Fight Club--backstage at the Spike TV Awards: Hangout with Brad Pitt & Edward Norton in the Green Room shortly after being inducted into the Spike TV “Guy Movie Hall of Fame”.
Features & details
Product information
Run time 2 hours and 14 minutes
Number of discs 1
Format Anamorphic, Widescreen
Language English (DTS-HD Master Audio 5.1)
Actors Edward Norton, Brad Pitt, Helena Bonham Carter
Region code Region 2 (This DVD may not be viewable outside Europe.)
Aspect Ratio 16:9 - 2.40:1
Manufacturer 20th Century Fox Home Entertainment
PostTweetShare Share with WhatsApp Share with Messenger
Community Updates
Amazon DealsAmazon discount code
If you click through or buy, retailers may pay hotukdeals some money, but this never affects which deals get posted. Find more info in our FAQs and About Us page.
New Comment Subscribe Save for later
4 Comments
29th Dec 2019
For those not on Prime, this is also available for the same price with free shipping for new copies on eBay as well
29th Dec 2019
Lol ordered so much from Amazon never knew TCB were giving cashback Thanks for posting
29th Dec 2019
nice ...shame we can't really talk about this 20 year old film