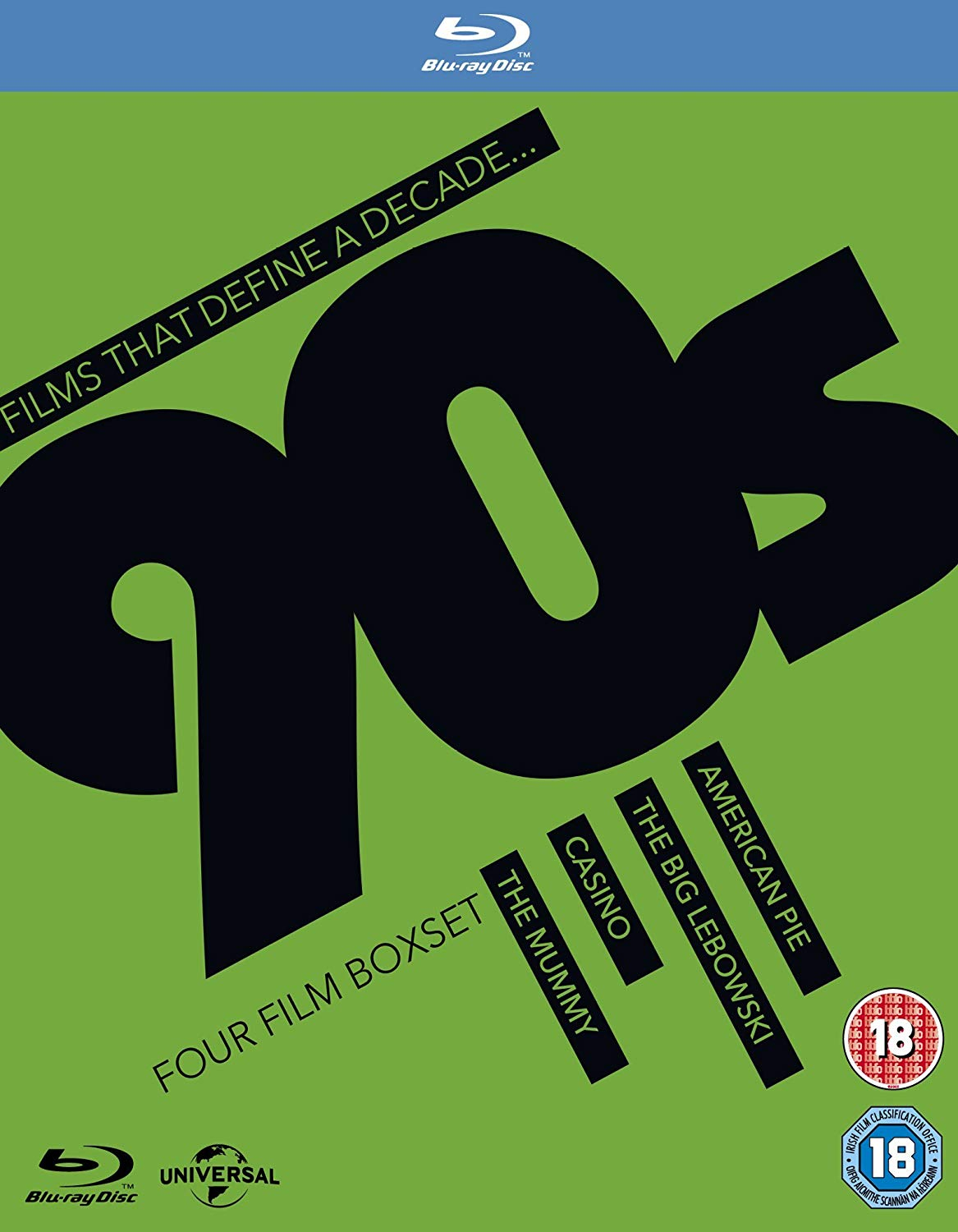 Collection of four classic films from the 1990s.


'American Pie' (1999) follows friends Jim (Jason Biggs), Oz (Chris Klein), Kevin (Thomas Ian Nicholas) and Finch (Eddie Kaye Thomas) as they attempt to lose their virginity before graduating from high school. With prom night only three weeks away, the gang will do anything to achieve their goal.

In 'The Big Lebowski' (1998), laid-back bowling buff Jeff 'the Dude' Lebowski (Jeff Bridges) gets mixed up in a blackmail plot involving a millionaire namesake. Roped into delivering the ransom to secure the release of the millionaire's kidnapped wife, the Dude's karmic balance is really put in a spin when his gun-toting buddy Walter (John Goodman) decides to help out.

In 'Casino' (1995), Robert De Niro stars as Sam 'Ace' Rothstein, the mob's frontman for a billion dollar Las Vegas casino. The story begins in 1973; Ace falls for hooker Ginger McKenna (Sharon Stone), while boyhood companion Nicky Santoro (Joe Pesci) is appointed as his muscle at the club. Over the years various jealousies surface and erupt in a series of violent betrayals and, ultimately, the destruction of Rothstein's empire.

Finally, in 'The Mummy' (1999), Rick O'Connell (Brendan Fraser) travels to Egypt to find Hamunaptra, the city of the dead. After teaming up with Englishman Jonathan (John Hannah) and his sister Evelyn (Rachel Weisz), Rick sets off for Hamunaptra, hoping to arrive before Beni (Kevin J. O'Connor), his crooked former associate. However, Beni has already invoked a curse which summons Imhotep (Arnold Vosloo), a supernaturally-gifted mummy, now free to feed upon the flesh of unfortunate explorers.
PostTweetShare Share with WhatsApp Share with Messenger
Community Updates
Amazon DealsAmazon discount code
New Comment Subscribe Save for later
Top comments
23rd Jan
Those films define the decade?

Must have been a poor decade...
11 Comments
23rd Jan
Those films define the decade?

Must have been a poor decade...
23rd Jan

Those films define the decade?Must have been a poor decade...

If we’re talking about films that truly ‘define’ a decade, rather than simply ones that were good, then American Pie is probably right up there. The cultural impact and number of films that followed that which were cut out of the same cloth is staggering. But those followed the 1999 film so it more defines 2000s films, in a weird sort of way. But I’d probably put Pulp Fiction, Forrest Gump and Jurassic Park in a set that defines the 90s. Still a great set though for the money, for sure.
23rd Jan
Showing as £17.25 for me.
23rd Jan

Same
23rd Jan
The Mummy? Ffs.
23rd Jan
Not your Dad's Mummy for sure ...
23rd Jan
Been this price on Zoom for months, think it's still in stock there.

As for the "defining the decade" debate, bear in mind that these sets only contain films from Universal Pictures. Even then some of the choices are questionable, for example Jaws isn't included on the 70s set.
24th Jan

It's absolutely a strange collection for each decade.
60s and 00s are also a fiver.
It's a bargain if you like collecting OOP titles because The War Wagon is OOP separately but available in 60s. Same with Earthquake in the 70s.
24th Jan
Casino is worth a fiver.
24th Jan

plus American pie has dated just like a real apple pie from the 90s would have.