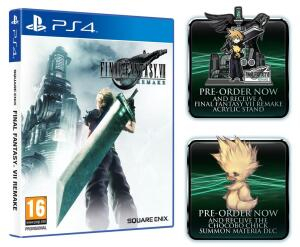 A spectacular reimagining of one of the most visionary games ever, the first game in this project will be set in the eclectic city of Midgar and presents a fully standalone gaming experience. Along with unforgettable characters and a powerful story 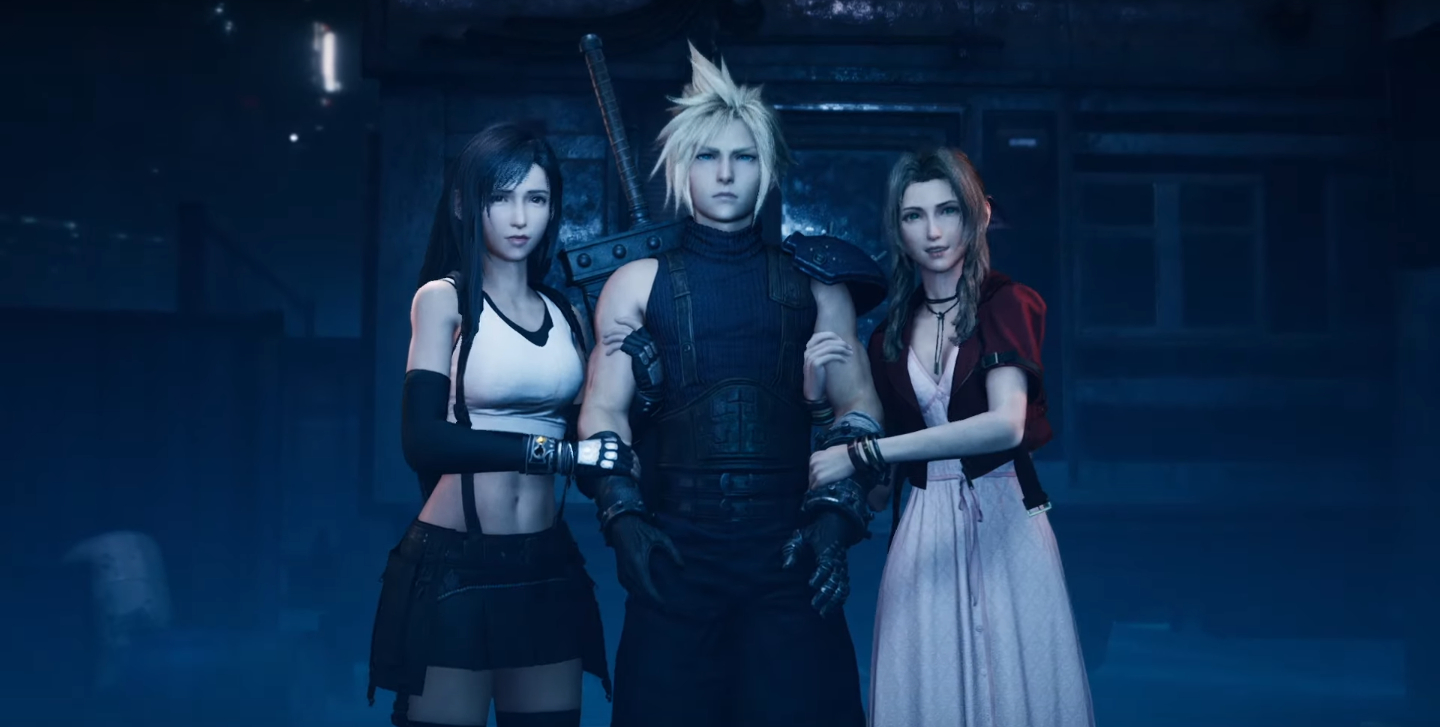 FINAL FANTASY VII REMAKE features a hybrid battle system that merges real-time action with strategic, command-based combat. First released in 1997 on the PlayStation® computer entertainment system, FINAL FANTASY VII is universally regarded as a hallmark title of the RPG genre. The original title received high praise for its epic storyline, unique characters, and movie sequences that utilized the most cutting-edge technology of the time.

Since then, the game has sold over 11 million copies worldwide and continues to receive widespread acclaim from critics and fans around the world. The popular game has even expanded into spin-offs, films, and merchandise.

The remake was announced following years of rumors and fan requests. Four key staff members returned to help with Remake: original character designer Tetsuya Nomura returned as both director and main character designer, original director Yoshinori Kitase acted as producer, and Kazushige Nojima returned to write new material. Due to the scale of the project, the team decided to release Remake as two discs so no original content would be cut. They also decided to add new content and adjust the original character designs to balance between realism and stylization.
PostTweetShare Share with WhatsApp Share with Messenger
Community Updates
ShopTo DealsShopTo discount code
New Comment Subscribe Save for later
Top comments
17th Jan
Looking forward to this, but will be waiting for it to drop in price before picking it up- I've waited this long, so can manage a few more months.
17th Jan

Just checked if my pre-order from Amazon still exists as it's been almost 4 years now!!! Can't believe how long they've been at it!
17th Jan
Whys the chocobo got clouds hair lol
99 Comments
17th Jan
Looking forward to this, but will be waiting for it to drop in price before picking it up- I've waited this long, so can manage a few more months.
17th Jan
I thought its release had been delayed?

EDIT: was to be released 3rd March 2020 but now 10th April 2020
eurogamer.net/art…ril
Edited by: "vxtyrant" 17th Jan
17th Jan
like a pound cheaper at base.com, though you wont get the shopto explusive pre-order

not sure i will get it, can prob wait until and if they release the rest of the story on PS5. If the sales are good i am sure there will be a collection addition or something a few years. waited 20 years can wait a few more
17th Jan

I thought its release had been delayed?

They must have increased their price then. This is my preorder from them.

Judging by the way they handled FFXV, even this first act of the game will have doubled in length by the time they release a 'complete' pack.
17th Jan

It looks more like SSJ2 Goku to me
17th Jan
What’s shopto policy on taking payment? Currently got a preorder with Amazon
17th Jan

Tick this box mate to pay on dispatch. 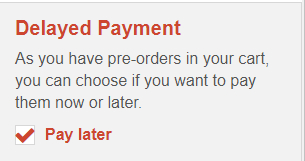 Tick this box mate to pay on dispatch.[Image]

Thanks will swap my preorder with Amazon
17th Jan

Tick this box mate to pay on dispatch.[Image]

Upon dispatch mate. They don't take it weeks in advance if you have ticked the box. But if you don't tick it, it will be taken immediately.
17th Jan

Yeah sorted it. Had an issue with game collection where they hold the payment or something which put them in a bad light with me for future regarding preorder.

Have you used shopto for preordering?
17th Jan

Yes, my last preorder was death stranding mate. They are good.
17th Jan

Yes, my last preorder was death stranding mate. They are good.

Thanks that’s good to know.

Got it off Base for £14.99 then it dropped to £12.85 so I rang them and complained and they refunded me as I haven’t even received it yet haha.

I’ve used shopto for preorders for years. No issues at all.Always had the game either a day before or on release day.
17th Jan
This acrylic tat is worth like 10p....In light of game release being moved again I am happy I did not pre-ordered I never will.. square-enix is utterly ridiculous with their devtime
17th Jan

I feel this one is more based around Cyberpunk being released around the same time.

They’ve been on the game for so long they just want maximum impact. Since it was announced many years ago I can wait an extra month for it
17th Jan

Cheers for letting me know.

Thanks. Good to know I just ask as I never really preorder anymore. Not since PS2 era really so so haven’t really had experience with internet based preorders as mad as that sounds
17th Jan

I hear you. I can remember walking into stores and putting a £5 deposit down it’s only the big releases I tend to preorder.
17th Jan

I’ve only preordered Kingdom Hearts 3 and Shenmue 1+2 via PSN of recent and I’ve still not completed any of them 😩 hahaha
17th Jan
The only reason I am getting PS4 Pro for!

The only reason I am getting PS4 Pro for!Bring it onnnnnn!!!!! 🙌

You've not got one yet?!

You MUST play God of War, Last of us Remastered, Horizon Zero Dawn & Spiderman on it! Absolutely stunning games.
17th Jan

Yeah, I know I know there are few games I am missing out on but since MS is looking after me so well with it’s amazing Game Pass, never felt the urge:)
But FF7 deserves crossing the border into the dark side 😜
17th Jan

I have both a Ps4 Pro and Xbox one X.

Yes, I need help. Expensive year coming up with the Ps5 and Series X...
17th Jan

Just kids and missus on your case and all will end very quickly!:)

Enjoy while you can and if you do have kids and family, tell me how you manage to enjoy all those gaming platforms without your kids hogging them 90% of the time!

I am not getting new console generation even though I know it will be the real step up we all needed from current, disappointing generation...
Way too many games to play still on Xbox one X and upcoming PS4Pro:)
Maybe in 2022:)
17th Jan

I have a girlfriend of 6 years, who also games on her own xbox and ps4!

We aren't too fussed about having kids for the foreseeable future. She's more bothered about having cats lmao.
17th Jan
So they cut out the Fat Chocobo summon from the original game and have made it pre-order DLC? Square-Enix can quite frankly do one if that's the way they are going to treat this remake.
17th Jan

Just checked if my pre-order from Amazon still exists as it's been almost 4 years now!!! Can't believe how long they've been at it!
17th Jan
I'm so looking forward to this. Probably get the deluxe though

Part of me wants First Class because I know at least one friend who's getting it, count FFVII as my favourite game of all time, have played it countless times, have called myself variations of Cloud all over the internet since 1997 and feel like it's "important as a super-fan" but... £260.... YIKES. Hard to justify
17th Jan
I'm getting the First Class edition So excited! I've had it pre-ordered since it was announced.
17th Jan
I wonder how many part this game is split into. kind of a dick move to not anncement anything about it
17th Jan

Cyberpunk got delayed to fall 2020

Did it? Wouldn’t have known as I’m not interested in it haha
17th Jan

You will both grow up one day :D.. I remember growing up and now I am a sad, bored and frustrated old man, if I am lucky she will let me play once a week... this week was Zelda
17th Jan
Is this released in parts/series, like the game was rumoured to be doing? Or is it the full game as a remake?
17th Jan