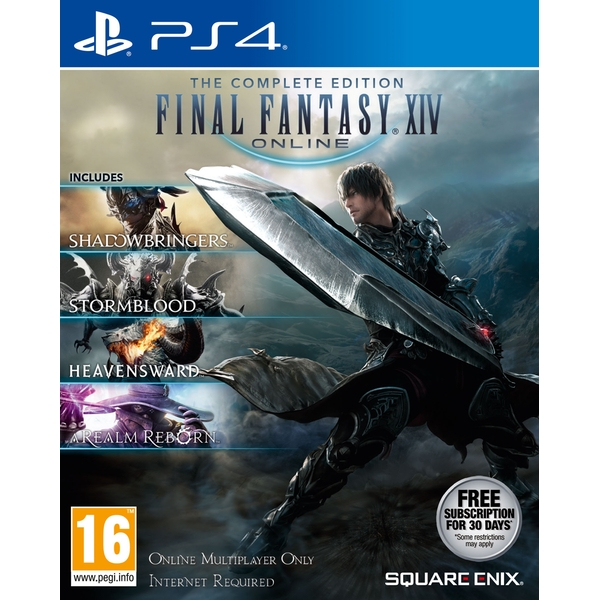 Create your own unique FINAL FANTASY hero and begin your adventures in the realm of Eorzea!

FINAL FANTASY XIV: Heavensward
Take to the skies and bring an end to the thousand-year Dragonsong War and restore light to the realm in this critically-acclaimed expansion.

FINAL FANTASY XIV: Shadowbringers
Become the Darkness in the latest expansion! Begin the next chapter and play as two new jobs - Gunbreaker and Dancer - as well as two new races - Viera and Hrothgar.

PostTweetShare Share with WhatsApp Share with Messenger
Community Updates
365games.co.uk Deals365games.co.uk promo code
New Comment SubscribeSave for later
7 Comments
31st Jul
Have they implemented all the quality of life and less grindy stuff yet?
Oh and is there still a monthly fee?
31st Jul

30 days free. Then onto the normal it seems.
Includes a 30-day free play period. This can only be applied once to each platform on a single service account. This 30-day free play period is not applicable to platforms on which a licence has already been registered. User Registration and Service subscription required to play the Game.
31st Jul

I've definitely played a trial or 2 by now
31st Jul

August 11th is completely revitalising the original ARR story to cut down the content grind required to reach the expansions.
Yes, the monthly fee is still there and always will be.
31st Jul
This has been posted: hotukdeals.com/dea…748
31st Jul
This is a good deal but if you are just curious about checking out the game then grab the free trial on the 11th of August. You can play for free for as long as you want all the way up to the end of the first expansion. The game will also be streamlined on the 11th to help you get to the expansions faster.

If you activate this full version then after 30 days you will need to pay the subscription to carry on. With the free trial you could casually play for months.

Don’t let the subscription put you off though. I just jump in for a month every now and then and I always get more than my money’s worth with the amount of new content added.

its refreshing playing a game like this where it’s not asking you to buy micro transactions or xp boosters every 2 minutes. The subscription helps keep the quality up.
31st Jul
I have around 1200 hours in this game (50 days) just from hopping on and off here and there. It's probably the best Final Fantasy ever, and it'll get even better after the ARR changes on the 11th for new comers.