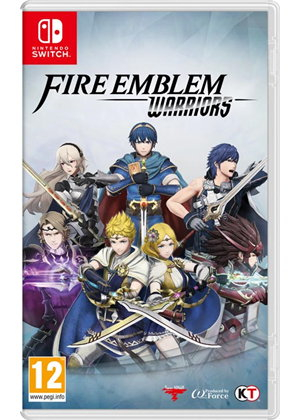 PostTweetShare Share with WhatsApp Share with Messenger
Community Updates
Base.com DealsBase.com discount code
If you click through or buy, retailers may pay hotukdeals some money, but this never affects which deals get posted. Find more info in our FAQs and About Us page.
New Comment Subscribe Save for later
19 Comments
6th Dec 2019
Really good price for this. Enjoyed my time with this and would definitely recommend for ~£20
6th Dec 2019
I know not everyone likes a Warriors game, but I do and I really enjoyed this one.
6th Dec 2019
Not a single decent price for Three Houses anywhere .
Same goes for Astral Chain, Mario Maker 2, Pokemon Sword/Shield, and even Xenoblade Chronicles 2 that has been out ages
6th Dec 2019

Pokemon went for £36 not long ago and it's brand new.

I think they’re basically saying that they want the AAA games for £20
6th Dec 2019
Fine, forget Pokemon but Switch offers have been fricking terrible. Black Friday my arse
6th Dec 2019

Umm... I already have a Switch, what I'm after is some games to play on it... where are the decent games for £35 or less? All I've seen are games that are terrible or have been out ages.
6th Dec 2019

Nintendo 1st party games rarely get major discounts unless the games are bad. Nintendo don't have much in the way of competetion so no-one is incentivised to lower the prices.
6th Dec 2019

Mario rabbids is amazing such a good game.
Golf story is suppose to be really good. Myself I didn't rate breath of the wild, witcher is definetly better which is certainly similar.
6th Dec 2019

Rabbids is good, but these are all old games (The Witcher is fine if you haven't played on another console though I suppose).
6th Dec 2019

Have you played all these “old” games?

All the ones that I want to, yes. Why, what's your problem?

Why are you getting on the offensive. It was a simple question so I could help recommend some games.
7th Dec 2019
sad when this game flopped massivly yet its still 20 pounds 2 years later, if this was on ps4 it would be like a fiver
7th Dec 2019

That's exactly what's getting me frustrated. Something like Xenoblade Chronicles 2 (been out absolutely ages) would be about £12 - £15 on PS4, but on Switch you'd be lucky to get it for less than £40.
13th Dec 2019

Three Houses is £34.99 over on Amazon at the moment. It's just won best strategy game at the Game Awards.