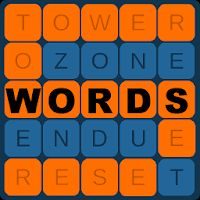 Good reviews (average 4.1 out of 5), no adverts, no in app purchases and no strange permissions required to run, great!

As always you don't have to install it now, just press install then as it goes to download press cancel and it will then be forever associated with your google account, ready for when you are ready. It will also be available for family sharing (if setup, see here for guidance support.google.com/googleplay/answer/7007852?hl=en-GB):

FIVE WORDS - Train your brain with a new type of word game puzzle!

Rearrange tiles to create a square of 5 five letter words that read the same across and down.

Five Words is an easy to learn and easy to play word game. Just drag the letter tiles at the bottom of the screen to the square at the top to create a grid of 5 words that read the same across and down. So if the first word across is "WORDS" then the first word down must be "WORDS" as well, and so on. The levels are not timed allowing you to play at your own pace and your current game is saved if you need to leave and come back later. The minimalist interface was designed for tablets and phones.

Unlike other word games out there, Five Words does not require you to download additional puzzle packs to keep playing. All one million+ unique puzzle combinations are included for free. Also, unlike other word games where many of the words sound made up, we use mostly common everyday English words for our puzzles. Though, we did leave a few in so you can learn some cool 5 letter words.

Five Words was loosely inspired by the "Sator square" an ancient Latin word square found buried in the ash of the volcano Mount Vesuvius in the ruins of Pompeii. Other versions have been discovered in historic sites around the world. And now this mysterious relic is updated and available right on your mobile device for your puzzle-solving pleasure!

Already a fan of the game? Follow us on Twitter: @defpotecstudios
PostTweetShare Share with WhatsApp Share with Messenger
Community Updates
Google Play DealsGoogle Play voucher
New Comment Subscribe Save for later
6 Comments
1st Mar
Already have this but cheers for posting heat added
1st Mar
I've had a quick attempt and it's a good game. #AnyoneElseFindItHard?
Edited by: "Mabbs" 1st Mar
1st Mar

Already have this but cheers for posting heat added

You're most welcome mate
1st Mar
Had this for some time and it's really addictive. Each "round" may only take a few seconds but it is one of those great simple games that make you want to have "just one more go" and before you know it, it's half an hour later (I've played it over 6,700 times!).