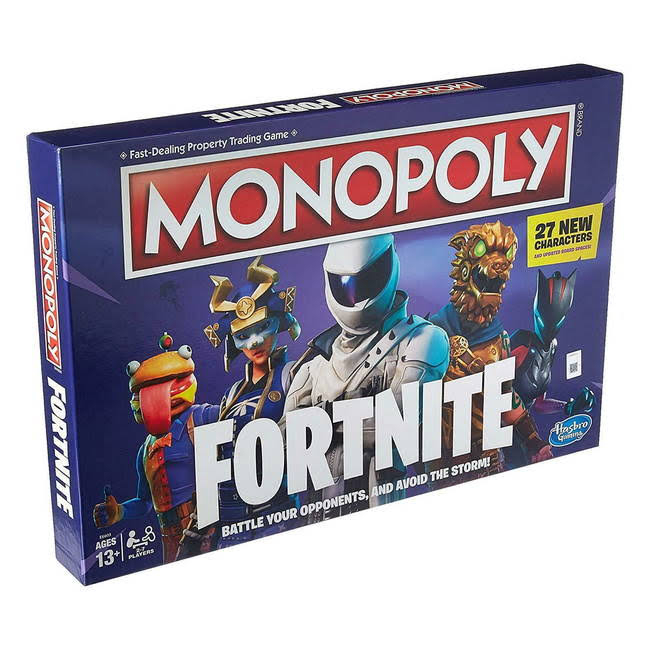 Description
Product Description
In this thrilling Fortnite edition of the Monopoly game, players claim locations, battle opponents, and avoid the storm to survive. The gameplay, design, and components of the board game include elements inspired by the video game including Fortnite locations and loot chest cards. Instead of Monopoly money, players earn health points (HP). first choose a character: pick from 27 awesome outfits. Then, it's time to battle. The action die lets players pick up health packs, build walls, and damage their opponents. Every time a player passes go They unleash the storm; avoid it or lose HP. Like in the Fortnite video game, The last player standing wins!

Features & details
MONOPOLY: FORTNITE EDITION BOARD GAME: Fortnite fans, this edition of the Monopoly game is inspired by the popular Fortnite video game!
FOR FORTNITE FANS: In the Monopoly: Fortnite Edition board game, 2 to 7 players claim locations, battle their opponents, and avoid the Storm to survive; the last player standing wins
FORTNITE PROPERTIES AND HEALTH POINTS: The Monopoly: Fortnite board game features well-known locations as properties, and players aim to earn chips instead of Monopoly money to stay in the game
BATTLE OPPONENTS: Use loot chest items and the action die to battle opponents in this fun board game for Monopoly fans and Fortnite fans, ages 13 and up.
CHOOSE AN OUTFIT: The game comes with 27 Fortnite outfits with pawn stands, and players can choose to play as their favourite. 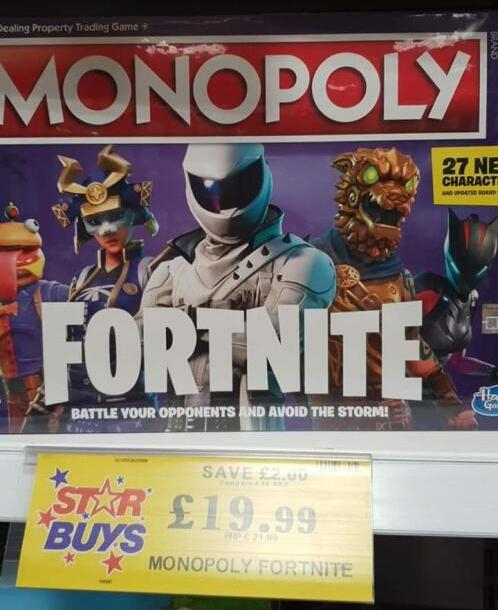 PostTweetShare Share with WhatsApp Share with Messenger
Community Updates
Home Bargains Deals
If you click through or buy, retailers may pay hotukdeals some money, but this never affects which deals get posted. Find more info in our FAQs and About Us page.
New Comment Subscribe Save for later
11 Comments
16th Oct 2019
Minus 18 ooh that's harsh
16th Oct 2019
I don't get why this is cold, says 29 quid on Amazon. Can confirm this is in other stores too, 19.99 in chadderton.
16th Oct 2019

Thank you neither do I by the time Christmas came people were paying ridiculous prices to get the 2018 version and fortnite is twice as popular than it was last year x
16th Oct 2019
Maybe they're voting cold so they can go stock up themselves and sell them on. 20 is pretty reasonable for a themed monopoly, especially fortnite.
16th Oct 2019

I thought so. Didn't think of that xx
16th Oct 2019
I picked it up for just over 15 quid as Smyths at the beginning of October. It wasn't a special offer or anything. I just though the price must have dropped because kids were moving on.
16th Oct 2019
smythstoys.com/uk/…466
16th Oct 2019

Good point. I never knew there were different versions but neither did my lad do I got away with it. Is there much difference? x
18th Oct 2019

The newer one has 23 of the new characters in it and as far as I can tell 5 of the places are different.