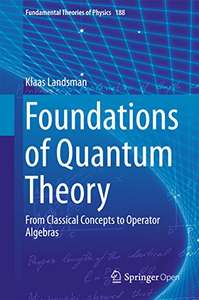 This book studies the foundations of quantum theory through its relationship to classical physics. This idea goes back to the Copenhagen Interpretation (in the original version due to Bohr and Heisenberg), which the author relates to the mathematical formalism of operator algebras originally created by von Neumann. The book therefore includes comprehensive appendices on functional analysis and C*-algebras, as well as a briefer one on logic, category theory, and topos theory. Matters of foundational as well as mathematical interest that are covered in detail include symmetry (and its "spontaneous" breaking), the measurement problem, the Kochen-Specker, Free Will, and Bell Theorems, the Kadison-Singer conjecture, quantization, indistinguishable particles, the quantum theory of large systems, and quantum logic, the latter in connection with the topos approach to quantum theory.

This book is Open Access under a CC BY licence.

Review
“Quantum theory has frequent applications in the subjects of quantum information theory and quantum optics. The purpose of this book is to present the foundations of quantum theory in connection with classical physics, from the point of view of classical-quantum duality. … This good book is recommended for mathematicians, physicists, philosophers of physics, researchers and advanced students in this field.” (Michael M. Dediu, Mathematical Reviews, Decemeber, 2017) --This text refers to the paperback edition.

About the Author
Klaas Landsman (1963) obtained his PhD in Theoretical High-Energy Physics from the University of Amsterdam in 1989. He was a research fellow at the University of Cambridge from 1989-1997, with a sojourn as Alexander von Humboldt Fellow in Hamburg from 1993-94. He was subsequently a Royal Academy Research Fellow at the University of Amsterdam from 1997-2002, and obtained a Pioneer Grant from NWO in 2002. Klaas has held the Chairs in Analysis and subsequently in Mathematical Physics at the Radboud University since 2004, and in 2011 was awarded the Bronze Medal of this university for his outreach work in mathematics. His research is mainly concerned with non-commutative geometry and with the mathematical foundations of quantum theory.