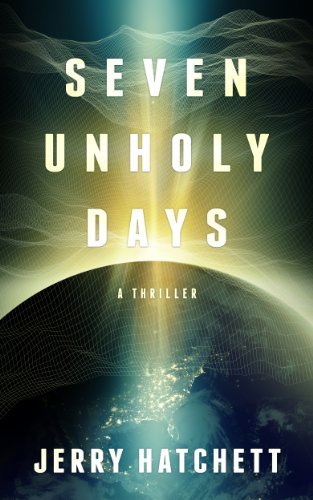 Celebrated entrepreneur Matt Decker goes from hero to goat when the futuristic power grid he designed is brought down by a hack that was supposed to be impossible, plunging the United States into darkness. As the nation descends into lethal pandemonium, Decker works feverishly to restore power and undo the damage. But the hack was just Day One, and the world is in for a very bad week.

Whoever is behind the attacks wants more than global death and destruction. It's also personal, and Decker is the target. As the attacks escalate and the death toll rises, they taunt him with riddles and threats, daring him to put the clues together in time to stop them from ushering in Armageddon.

Decker and his thrown-together team are up against the wall and racing the clock in this thriller that grabs you early and never lets go. Read it now and find out why Jerry Hatchett is the author you can't put down.

"A simple glitch in a power grid heralds the beginning of a madman's scheme to bring about a biblical apocalypse. Written in a staccato style that will leave readers breathless and flipping pages long into the night, Hatchett's...novel, SEVEN UNHOLY DAYS, is a thriller not to be missed!"
PostTweetShare Share with WhatsApp Share with Messenger
Community Updates
Amazon DealsAmazon discount code
New Comment Subscribe Save for later
4 Comments
19th May
Heat
19th May
I can't remember my seven unholy days 🥴
19th May
Thanks kreator.
This looks like a good one.
19th May
Thanks