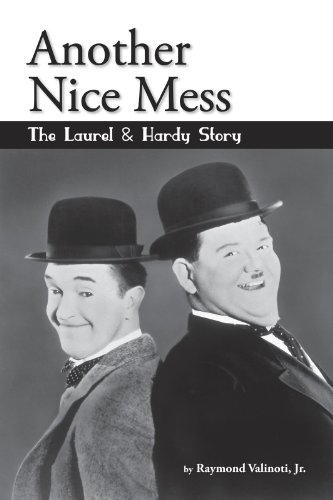 Arguably the greatest comedy duo in show business history, Stan Laurel and Oliver Hardy delighted filmgoers and theatregoers for over thirty years. The public not only found Laurel's serene simpleton and Hardy's pompous buffoon hilarious, but they also thought of them as friends. Laurel and Hardy may have been nitwits, but they were loveable nitwits.

Another Nice Mess: The Laurel and Hardy Story explores the lives and careers of Laurel and Hardy. The book examines how the comedians teamed up and it explains why, nearly half a century after their deaths, their films continue to enchant people all over the world.

Raymond Valinoti, Jr.. is a resident of Berkeley Heights, NJ. He has a Master's in Library Science from Rutgers University and is a freelance researcher. His articles on film have been published in the magazines Midnight Marquee and Films of the Golden Age. He also writes film reviews for an online news publication, The Alternative Press.
PostTweetShare Share with WhatsApp Share with Messenger
Community Updates
Top comments
8 Comments
Post a comment