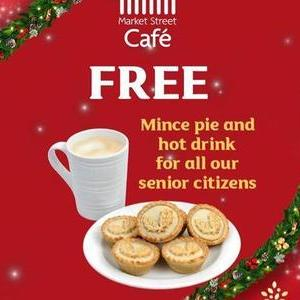 Not trying to be PC but aren't we suppose to say senior citizens, nowadays?

Not in supermarket terms it's not. They started stocking Christmas stuff at the end of August!!
17th Nov 2019

What's the definition of OAP these days? I.E. Is it 65 years old?

i would think anyone that looks like they could be in receipt of a pension i doubt anyone would be asked to produce ID for a hot drink and mince pie! however if you were old but looked young, then you would be stuffed as they will ask you to pay.
17th Nov 2019

My mams 64 and I'd say she looks in her 50s still, think that's where I got my young looks from also not sure if they would ask for ID, my mam would probably take it as a compliment! Her mate on the other hand who's the same age looks about 80
17th Nov 2019

Will there be any offers for the working poor also?

i think in practice, they will charge everyone until you pipe up and say that you are an OAP and then they will deduct the cost if they think that you look like one, lol if they don't believe you then they may ask how old you are and ask if you have any ID.

unless you obviously look like an OAP, then they would deduct the cost as they feel sorry for you anyway

i personally think these promotions are ageist and shouldn't be encouraged. why should people get concessions simply because of their age?? having said that, i have voted hot, but i disagree with it
Edited by: "mutley1" 17th Nov 2019
17th Nov 2019

As I'm hurtling towards the senior citizen age group at a very fast rate of knotts, I actually do believe it's a good thing.It gives older people somewhere warm to go to, and have a hot drink too.
Not every senior citizen as a good pension, many are managing on state pensions of around £150 per week. Cost of heating is high.
Old age can be very isolating, and often, little structure to each day.
It would be good if Morrisons could do this offer one day per week, during December.
Our local store has a "quiet time" for shopping, early on Saturday mornings, so other members of society are also being catered for. (even if not in a culinary fashion).
Edited by: "Lowin" 17th Nov 2019
17th Nov 2019
Yippee. I thought I was going to be a lonely old geezer this Xmas but if I go to join the obvious long queue at Morrisons three weeks before the white bearded man passes my door I wont be. Maybe there will be an old dear who takes pity on me and takes me home with her. But let me tell you that an oldie like me isn't just for Xmas just to be used and thrown out on boxing day. Must go now to get ready for the nurse to come and give me my monthly bed bath.
17th Nov 2019
I was just wondering would disabled people also qualify for this as well. Just like the bus pass? Haha
As in generally, disabled people are segregated and can be isolated at these times. Would do wonders for mental health and wellbeing.
Edited by: "leegp79" 17th Nov 2019
17th Nov 2019

it seems to me that there is a broad assumption that all OAP deserve discounts as they are all on low income but there are lots of young people on low income as well so discounts should not be age related but income related. the existing OAP population have better pension than the younger generation will ever achieve when they get there and although a lot of OAP are on low income, there are also a lot on comfortable means, so much so that they can afford to help their grandchildren out with buying a property or pay for the university education. just because someone is over state pension age, doesn't necessarily mean they are on low income and so discounts like this where everyone is entitled to the discount simply because of their age is not fair as it means there will be less discount for the younger generation.
Edited by: "mutley1" 17th Nov 2019
17th Nov 2019

The second word is off

Kindest regards
17th Nov 2019
Pensions aren’t given out for free, people had to work for them. And the ones who can afford to help their grandchildren are in the minority.
17th Nov 2019
Ffs - people moaning on here saying senior citizens don’t deserve a free hot drink & mince pie! Seriously! It’s a nice gesture, that’s all. Perhaps if you were of that age, you would appreciate it. I’m in my thirties and certainly don’t begrudge the older generation getting a free mince pie & drink! Fair play to Morrisons.
17th Nov 2019
Most pensioners have paid tax so deserve some freebies. Most young people don’t know the meaning of work so do not deserve freebies
Edited by: "keithdetton" 17th Nov 2019
17th Nov 2019

Would do wonders for mental health and wellbeing.

Really? This discussion doesn't. Not going to feel too cheerful when you turn up at Morrisons and people in their 20's and 80's are having fist-fights over a free snack. It's a debate worth having, but hardly the event you want to plant your flag in the ground over. If we allow them this, what next? Lunchtime until 5pm? Good God, imagine.

Anyway, I had a look around for hard numbers and found it difficult to get directly comparable ones, but there's certainly some to chew over.

Long story short: Generally speaking, the older you are the wealthier you are, by quite a bit in fact. Most of it is accounted for by access to cheap property and lucrative pensions, comparatively, which ceased to be the case within the last two or three decades. It also means the generation that came immediately after them will do quite well as far as inheritance goes, albeit so late in life as to be almost retirement material itself.

However, a house is not spending money, and is no use for inheritence unless you keep it. Again, the older you are the more *liquid* wealth you have, but the disparity is far less great. And while elderly taxpayers average an income around that of somebody in their mid-20's, they also have no rent, children, or mortage. I couldn't find information for non-taxpayers which I suspect would tilt the numbers back downward fairly hard, but I works with what I gots.