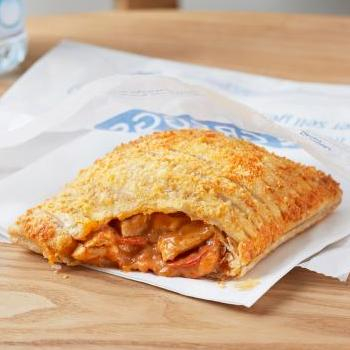 Free Spicy Chicken & Pepperoni Bake or Cheese & Onion Bake in the Greggs App
Scan in store to redeem, ends 31/10/19 Selected accounts and will appear in accounts between 8th-10th October.

All you really need to know is that it was formerly called the Spicy One and it's BACK!!

Fajita flavour chicken breast pieces in a creamy sauce with pepperoni, wrapped in a glazed puff pastry lattice with a crumbled cheese topping.

1. The free Spicy Chicken & Pepperoni Bake reward (the ‘Reward’) will appear on 200,000 current Greggs Rewards members’ accounts between the 8th October and the 10th October 2019. These specified accounts will be chosen by Greggs on the basis of members with the highest spend value in the weeks leading up to the Reward giveaway.

2. The Reward must be redeemed by 31st October 2019 after which the Reward will expire and will no longer be capable of being redeemed.

3. The Reward entitles a member to a free Spicy Chicken & Pepperoni Bake or a Cheese & Onion Bake.

4. The Reward is not valid in conjunction with any other offer

5. This Reward has no cash value and cannot be exchanged for any other product or cash

6. Greggs plc reserves the right to withdraw this Reward at any time.

7. Greggs plc reserves the right to substitute any product within this promotion at its absolute discretion

9. To redeem the Reward, members simply need to select the Spicy Chicken & Pepperoni Bake and tell the Team Member at the Greggs shop that they are redeeming it through Greggs Rewards. Eligible members will then generate a code (9 digit or QR code) through the Greggs smartphone app and scan in shop. The Reward will be automatically redeemed.