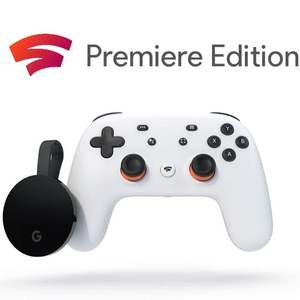 Codes for the free hardware bundle will begin rolling out from the 10th December, with the latest date to receive a code being the 15th January.

'Qualifying purchases get a bonus Stadia Premiere Edition.¹ Terms apply.'
¹ Must be 18 years or older with a shipping address in the United Kingdom to qualify for the Stadia Premiere Edition offer. Offer expires 18/12/20 at 8.00 a.m. GMT or while supplies last and subject to availability. Redemption code must be redeemed by 11.59 p.m. GMT on 31 January 2021 or it will expire. To qualify for the offer must pre-order or purchase Cyberpunk 2077 on Stadia during the promotional period. See terms.
PostTweetShare Share with WhatsApp Share with Messenger
Community Updates
25th Nov
FAQ:

> Can you pay with Google Play credit?

Yes, but only through the Android Stadia app. If you don't have access to an Android device, you can try running the Stadia app inside an Android emulator (e.g. NoxPlayer) running on your PC/Mac.

> Can the £10 off game code received for signing up to Stadia Pro [trial] be used against Cyberpunk 2077?

No, the £10 off game code cannot be used against Pre-orders.
However the code might be useable once Cyberpunk 2077 has released.

> Do I have to pay a Stadia Pro subscription to continue to play?

No. Games you've previous bought on the platform can be played subscription-free at 1080p resolution with stereo sound.

> When will I receive the Stadia Premiere pack? (containing the Chromecast Ultra & Stadia Controller)

A code to redeem the Stadia Premiere pack will be emailed to you at some point between Cyberpunk 2077's launch date (currently 10th December 2020), and 15th January 2021.
The code must be redeemed through the UK Google Store ( store.google.com/gb/ ) by 31st January 2021.
Cyber Monday 2020 DealsGoogle Store DealsGoogle Store voucher codes
New Comment SubscribeSave for later
Top comments
990 Comments
Post a comment