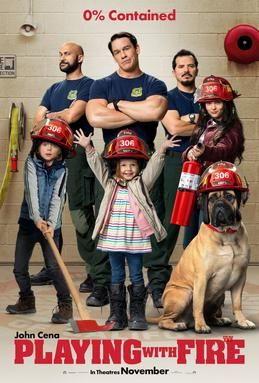 Playing with Fire is a 2019 American familycomedy film directed by Andy Fickman from a screenplay by Dan Ewen and Matt Lieberman. The film stars John Cena, Keegan-Michael Key, John Leguizamo, Brianna Hildebrand, Dennis Haysbert, and Judy Greer, and follows a group of smoke jumpers who must watch over three children who have been separated from their parents following an accident.
PostTweetShare Share with WhatsApp Share with Messenger
Community Updates
Sky Digital DealsSky Digital offer code
If you click through or buy, retailers may pay hotukdeals some money, but this never affects which deals get posted. Find more info in our FAQs and About Us page.
New Comment Subscribe Save for later
10 Comments
22nd Nov 2019
It’s a ballot,you are not guaranteed tickets and they are not free you need to have Sky TV to qualify for entry into the ballot.
22nd Nov 2019

My husband has jus booked some for sat 7th, and yes I do have sky tv
22nd Nov 2019
Finally cancelled sky for good this month. The cancellation guy says to me but I’ve got 7.5 yrs of vip built up you will lose out on. In the 7.5 yrs of vip I got one supersonic dvd out of it and not even blu Ray
22nd Nov 2019
This should also be noted.....

Having a ticket does not guarantee entry. Not everyone who is successful in getting tickets will go to the screening, so we have to over-issue more tickets by a percentage to compensate for these no-shows. This makes sure we have a full audience.
We want Sky VIP to be fair for everyone, so we reserve the right to restrict access to events for a period of time, to those Sky VIP members who fail to cancel when they’re unable to attend events that they’ve booked.
22nd Nov 2019

Tbf I’ve had 3 pairs of football tickets this season through VIP which in total saved me £132.00 since September so the sky has paid for itself.....the benefits of supporting a league 2 team though,doubt I’d of got any tickets if I supported a premier league or championship team as there will be a lot more entries into the ballot.
22nd Nov 2019
Thanks for the heads up, just booked. I love sky vip I’ve had free dvds, tickets to football games and various cinema screenings too, just get there a bit early. I’ve never not got into a screening 🏻
22nd Nov 2019

They're not all ballots, this one isn't. And you don't have to have Sky TV, Broadband alone is sufficient.
22nd Nov 2019
Thanks for posting, managed to get some tickets
22nd Nov 2019
I’m now a fan of Sky VIP... they don’t do many free screenings locally to me but I got to go watch Marvel Universe live last night with my family for free (£30 a flippin’ ticket)so they’ve made up for it
23rd Nov 2019

It's not a ballot. And you don't need sky TV. So what are you talking about