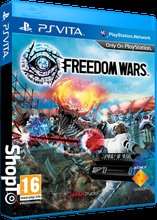 JAPAN Studio and developers Shift and Dimps have joined forces to create Freedom Wars, an action-packed RPG, launching exclusively on the PlayStation®Vita handheld entertainment system. One of most anticipated games of 2014 in Japan, the frenetic, co-op action will launch in North America later this year.
Freedom Wars is set in PT Era 102014, the earth has been devastated by atmospheric pollution and the world is running out of resources. Human beings can only survive inside purpose-built facilities known as Panopticons. City-states across the dystopian world fight each other to take control of what is left, using Panopticons to take control of precious finite resources. Players take on the role of a prisoner in this Panopticon facility, subject to a million-year prison sentence and forced to fight for their freedom.
Freedom Wars promises to combine an epic single-player campaign with a substantial multiplayer offering. Supported by a robust multiplayer suite, up to four players via Ad-Hoc and eight players via Online can fight in an intense blend of action and strategy to rescue civilians from massive mechanic monsters known as Abductors. In Freedom Wars, complete your missions, reduce your sentence, earn your freedom.
Large-Scale Co-Op Action - Work together with up to seven other players in an intense blend of action and strategy. Freedom Wars supports up to four players via Ad-Hoc and up to eight players via Wi-Fi connections.
Extraordinary Weapons - Players will be able to use variety of weapons such as swords, rifles and machine guns. The most unique and valued weapon is the Thorn that is wrapped around the player's arm, which can be used for multiple actions, including hooking on to enemies or walls to propel or attack, moving vertically, tying down enemies and more.
Join a Panopticon - Select a city to represent and help your city rise in the global ranks as you battle users from other regions and countries.
Deep Customization - In addition to the challenging co-op gameplay, Freedom Wars boasts an impressive catalog of customizable features ranging from weapon load-outs to the protagonist itself.
PostTweetShare Share with WhatsApp Share with Messenger
Community Updates
12 Comments
Post a comment