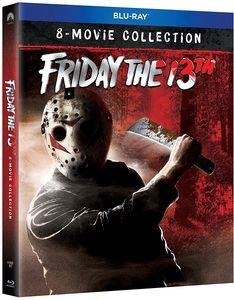 I can confirm that these work on region b Blu-ray players
18th Aug 2019
No pun intended but 'wowza' that's one hell of a price for all them films
18th Aug 2019
Thanks to op for heads up on this deal. I accidentally ordered two copies and there’s no way of cancelling order like amazon. Do they take payment immediately and are they good at responding as have pinged off an email to them. Heat given.
18th Aug 2019
If it's the 'ultimate collection', you'd probably expect 9 and 10 as well.
Still, good price for what you get.
18th Aug 2019

Given the prices these go for on Ebay, I think you could easily get your money back with a little on top!
18th Aug 2019

Unfortunately 9 and 10 were done by a different studio. The rights for the Friday series are a mess.
18th Aug 2019
Thanks, I missed these when they were on eBay originally at this sort of price a year or more ago.

I haven't used WOWHD before but it seems ok.
UK postcodes show up as international shipping during checkout so this ships from the USA?
---
Err, on checking the front page of the site I get the message:
'It appears you are accessing WOW HD from United States. Would you prefer to shop using the US Dollar?'
I am in the UK and on VirginMedia.
Anyone else getting this?
Thanks
Edited by: "ode" 18th Aug 2019
18th Aug 2019
Anyone used this site before? Trustpilot reviews mention being hit with unmentioned extra customs fees and poor support.
18th Aug 2019
"Attributes:Boxed Set, Widescreen, Amaray Case, Dubbed"

Are you using a vpn?
18th Aug 2019
On backorder :-(
18th Aug 2019
I use Wowhd along with their Ebay account Allyourmusic all the time and never had a problem. You normally received the item within 1-2 weeks from dispatch. Only negative i would say is that they now charge 20% vat on orders over £15 but i have never been charged customs fees on any of the hundreds of items i have bought from them.
18th Aug 2019

They take payment immediately and if an item is in stock they dispatch the same day so won't be able to cancel any orders.
18th Aug 2019

Any item over £15 you are automatically charged a further 20% VAT by WOW HD so your HM Customs fees are paid there and then.
18th Aug 2019

Are you using a vpn?

Ah, so they are Allyoumusic.

Are any of the others worth watching apart from number one ?

Jason Takes Manhattan has some of my favourite death scenes
19th Aug 2019
Nice, I've wanted these in HD for some time. It's annoying how much a PITA it is to buy a lot of 80s horror on blu ray. The recent Critters collection for example.
22nd Aug 2019
Showing as Out of stock
13th Sep 2019
Friday the 13th box set? Check.
Fridge full of cold beers? Check.
Plenty of munchies? Check.
Just Eat discount code for pizza? Check.
Let the killing begin....