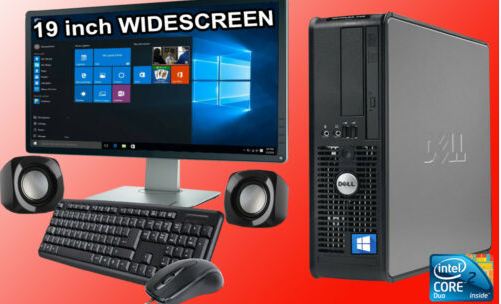 Any good for kids games or not?

It’s probably better than what the school have
It’s pretty good for web browsing
YouTube
Kids games
Netflix even though the screen is not HD
But it has open office
If you need Microsoft office you will need to buy that from eBay or else where
18th Nov 2019
Thanks op! Brill price
18th Nov 2019
These still do the basics what must need, and no need to send to land fill
18th Nov 2019
out of stock
18th Nov 2019
That's not a bad little setup for under £90, Core 2 Quad should be nippy enough for most things. Anyone worked out what Dell tower it is? And if you can fit a basic PCIe GPU in there as that would help with general speed - the integrated GPU isn't great with Windows 10.
18th Nov 2019

Can it run crysis?

Crysis in your pocket only
19th Nov 2019
What upgrades could you give this for better gaming experience, doesn't need to be top end.
19th Nov 2019

I think i5 processor and a good graphic card
But the same guys sell ones for about 120 or Abit more I think
19th Nov 2019
Thanks OP, I have ordered one. Perfect for my daughters use; school work, youtube, roblox, minecraft and netflix.
19th Nov 2019

What kind of money are we talking? My daughter wants a PC for her birthday in January, thought about building her one but if that could be easily upgraded would be a better route, she's not big into gaming but would like her to have that option, it would be more for homework and music and watching videos.
19th Nov 2019

lots of schools give their pupils office365 for free - don't think it costs the schools anything either?
19th Nov 2019

You can't play Fortnite on this. You'd need to put a graphics card in. It'd have to be a half-height graphics card with low power requirements.

This wouldn't be good enough for something like the new Call of Duty however. But there are thousands of games you could play with this spec.

You will need something like this
Will cost around 189

They keep updating the stock level
That’s what happened yesterday

You all know that you can get free MS office if you have kids in school right?
19th Nov 2019

No I did not know How so

My brother is in high school and gets office through his school. But it's not like the whole family can use it on their own computers also. He has to log in and it's tied to his school Microsoft account.
Edited by: "Solidcancer07" 19th Nov 2019
19th Nov 2019
Have I missed something. The link quotes i5 processor and 256 SSD, but that is not what is in the specs above, is it?
19th Nov 2019
I suspect this isn't anywhere near powerful enough to run Cities:Skylines, and if not then maybe somebody can point me in the direction of what would be required to adequately those games, with the DLC? I'm not really interested in any other games, just Cities: Skylines.

I'm sorry but I just find computers so confusing nowadays. Once upon a time I knew a lot and exactly what was what, but things have got beyond my ability to try and keep up!
19th Nov 2019
how come it says 22" on the the picture advertising it, yet on the one above it says 19"
19th Nov 2019

Any good for kids games or not?

With no GPU it would be very poor, running any type of game, ANY besides the most basic would be a chore
before buying I would make 100% sure that the motherboard can have a gpu fitted, as a lot of these are cut down boards, where you can’t fit a GOU, if that’s the case this would only be good for work/schoolwork.
Edited by: "talkSpot" 19th Nov 2019
19th Nov 2019
This item is out of stock
19th Nov 2019

Cities: Skylines can be a pretty demanding game - especially when your city gets large.
Essentially there are two factors to consider - the CPU and the GPU (graphics chip).
Most games are fairly light on the actual brain of the machine (the CPU) but lean heavily on the GPU as it handles all the textures and effects, shadows and other fancy stuff.
However, world building games like Cities:Skyline have to keep track of a lot of things: buildings, traffic, people etc. so they need the raw maths power of the CPU as well.

Three years ago, I specced a gaming laptop for a friend who just plays Skylines. It has this:-

How are you going to upgrade this to an i5? If you're going to do that you might as well just buy something else you'll need a new CPU, motherboard, RAM, probably case and PSU too. You might be able to keep the SSD and monitor